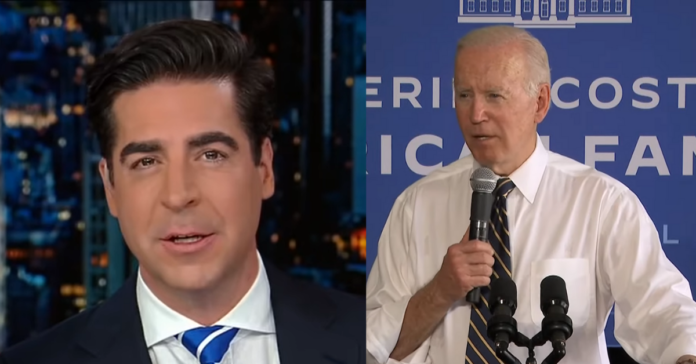 Biden went to Chicago to tell the International Brotherhood of Electrical Workers that inflation was not his fault and tried to rebrand Trump giving him the nickname the “great MAGA king.”

“My Republican colleagues say these programs to help the working class and middle-class people, that, they say, that’s why we have inflation.

“They don’t want to solve inflation just by lowering the cost.

“They want to solve it by raising taxes and lowering your income.

“If I didn’t see the actual document, I’d think I was making it up.

“The ultra-MAGA Republicans’ proposal puts, here’s what it does, it puts social security, Medicare — this is the Republican plan now, the only one out there — and Medicaid on the chopping block every five years.”

“Did Hunter come up with that one?

“That’s how Joe Biden views anybody who disagrees with him.

“Joe can’t run on the issues because he hasn’t gotten any results.

“So he is trying to rip off the Trump nickname game.”

Jesse Watters Perplexed by 'Ultra-MAGA' Label, Wonders If Hunter Biden Came Up With It: 'Sounds Like a Condom or a Beer' https://t.co/DumnINfPPy