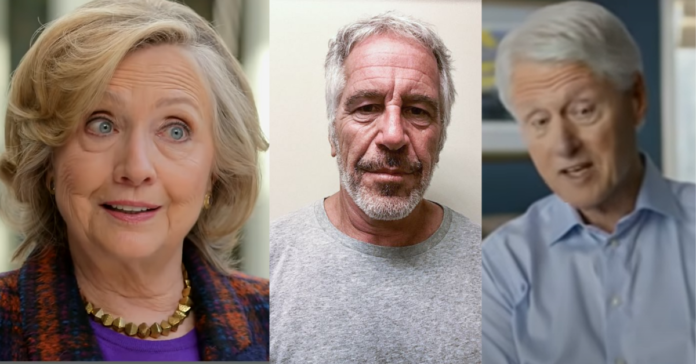 Former President Bill Clinton has some explaining to do after an explosive report in The Daily Mail shows that disgraced pervert Jeffrey Epstein brought eight young women with him to visit Bill Clinton in the White House.

Epstein visited the Executive Mansion at least 17 times during Bill Clinton’s first term. He was joined by eight different women during the visits that took place between 1993 and 1995.

From The Daily Mail: Many of the women Epstein took on his trips to Washington were known to have had romantic relationships with him.

Nice scoop from @TVolscho
& @danielgbates. Epstein brought 8 women with him to the Clinton White House in the 1990s—including Eva Andersson-Dubin… https://t.co/8FDo4lpQru

They include Celina Midelfart, then 21, Eva Andersson-Dubin, then 33, Francis Jardine, who was believed to be in her 20s, and his one-time girlfriend turned madam, Ghislaine Maxwell, who was 32.

The four other women who also appear in the logs are Jennifer Garrison, Shelley Gafni, Jennifer Driver, and Lyoubov Orlova.

DailyMail.com was unable to reach the four women and confirm the purpose of their visits, however, flight logs from Epstein’s private jet tally with White House visitor records showing they were with him at the time.

Maxwell, now 60, was found guilty last month of recruiting and trafficking underage girls for the disgraced financier between 1994 and 1997, and is currently awaiting sentencing behind bars.

Her high-profile trial in New York heard sensational claims that Epstein was seeing Midelfart – a Norwegian heiress who also once dated Donald Trump – in the mid 1990s around the same time he was dating Maxwell and other women.

Though the logs don’t identify the purpose of the visits, they do record Epstein popping in and out of Clinton’s home twice in one day on three different occasions.

Records also reveals that Epstein seemed quite comfortable in the presidential quarters; newly disclosed footage reveals that he decorated his Palm Beach mansion with photos of himself standing at the podium of the White House Briefing Room.

White House visitor logs obtained by the Daily Mail reveal that Jeffrey Epstein often had women with him during his 17 visits to Bill Clinton’s White House. https://t.co/FExnVlv7xB