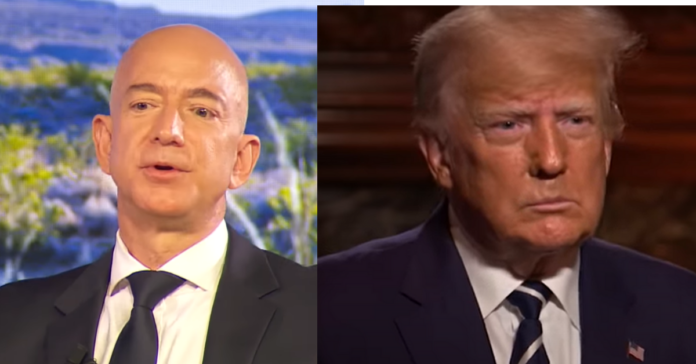 Trump nemesis Jeff Bezos just agreed to buy film studio Metro Goldwyn Mayer (MGM) which includes the rights to Trump’s hit show The Apprentice. Many people, like Stephen Colbert, believe Bezos had secondary reasons to buy the studio – to get access to the missing Trump tapes.

Ever since Trump announced he was running reporters and others have been desperately trying to get access to the thousands of hours of Apprentice tapes and outtakes hoping to find something to embarrass Trump with. Mark Burnett who owned the show before MGM bought Burnett’s production company told them all to go pound sand.

Mike Hopkins, Senior Vice President of Prime Video and Amazon Studios said: “The real financial value behind this deal is the treasure trove of IP in the deep catalog that we plan to reimagine and develop together with MGM’s talented team. It’s very exciting and provides so many opportunities for high-quality storytelling.”

“The latest Bezos news-os is that Amazon is nearing a deal to buy the Hollywood studio MGM,” Colbert said. “That is such a billionaire move.”

Colbert continued: “So, why would one of the world’s richest men pay almost twice the value for a struggling movie studio that recently went bankrupt? Well, it could be that Jeff Bezos has an ongoing feud with the former president.”

“Guess what? All the outtakes from The Apprentice are owned by MGM.”

“Holy mother of DVD extras. The private footage of a TV billionaire is going to belong to an actual billionaire,” Colbert said.

“See, for years, there have been allegations about outtakes from The Apprentice where the Slob Father uses racist language, including by Tom Arnold, who says he saw it personally.”

“Despite reports to the contrary, Mark Burnett does not have the ability nor the right to release footage or other material from The Apprentice,” MGM and Burnett said in Oct. 2016. “Various contractual and legal requirements also restrict MGM’s ability to release such material.”

It is not clear if Bezos gets access to all the outtakes but if he dos you can expect him to mine them for hit jobs on Trump.

Amazon said Wednesday it will acquire MGM Studios for $8.45 billion, marking its boldest move yet into the entertainment industry and turbocharging its streaming ambitions.

The deal is the second-largest acquisition in Amazon’s history, behind its $13.7 billion purchase of Whole Foods in 2017.

…The deal emphasizes Amazon’s willingness to spend deeply to remain competitive in the crowded streaming market. Amazon, Netflix, Disney and other video streaming services have been looking to beef up their content libraries to win over subscribers, committing billions toward licensing content and developing original programming.

At the same time, media juggernauts have undergone further consolidation to achieve greater scale to take on the likes of Amazon and Netflix. Discovery’s $43 billion deal to merge with WarnerMedia after a spinoff from AT&T, announced last week, is the latest sign of that.

Amazon has long been willing to make big investments on video content as a strategy to buoy Prime memberships, which now surpass 200 million globally. It spent $11 billion on video and music content last year, up from $7.8 billion in 2019.

CEO Jeff Bezos has argued that these investments reinforce Amazon’s “flywheel effect,” in that it attracts more Prime subscribers, who in turn, tend to spend more on the site.

Amazon has landed hits in film and television programming, including “The Big Sick” and “Manchester By The Sea,” winner of the 2017 Academy Award for best original screenplay, as well as series “The Marvelous Mrs. Maisel” and “Transparent.”

Another closely watched project, an adaptation of “Lord of the Rings,” is currently in production. “Lord of the Rings” has a season one price tag of $465 million, likely making it one of the costliest television series ever made.