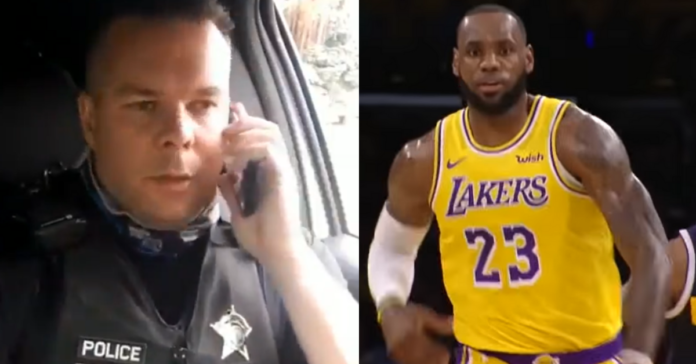 Nate Silvester, a police officer in Bellevue, Idaho, who was suspended for a week over his viral TikTok video joking about calling Lebron James in the middle of a domestic disturbance, has raised over $83,000 in a day.

Silvester’s best friend, Gannon Ward was behind the gofundme campaign. He wrote, “Hi, my name is Gannon. The recent viral TikTok video of a cop calling out Lebron James has cost the cop, my best friend in the world, Officer Nate Silvester a suspension without pay.

“He’s still got his job for now, but apparently the town where he polices didn’t find his TikTok as amazingly comical, and accurate as the 4.5 million viewers did, including some major news networks.

“The future is uncertain. I just don’t want to see my friend lose out on any money for this, when it was meant to be satirical, and to point out an obvious flaw in Lebron’s logic.

“Please donate what you can contribute. Every dollar helps! Thanks!!

“Edit: Words cannot express how much this means to me that everyone is donating! Nate is speechless.

“He wishes for me to let everyone know how much this means to him to have your support! WE BACK THE BLUE!!!

EDIT 2: “Nate is beside himself!! He is SO GRATEFUL for everyone’s donations. He was literally speechless.

“He has decided to donate a portion to the charity The First Responders Children’s Foundation, a charity for the families of fallen officers and first responders. Therefore, I’m upping the goal again!”

“I never expected my tiktok to go viral the way it did. However, when it started gaining traction I anticipated that some would come out in opposition and there would be some blow back,” Silvester told the Gateway Pundit.

“My immediate supervisors and coworkers have been supportive but have also tried to stay neutral so as not to put their jobs at risk — which is very understandable. They are great officers and incredible human beings,” Silvester said.

“Yes I am. This has become much bigger than I could have expected,” he said as to whether he will keep making video.

“I have a following of amazing people who have shown their overwhelming support for me and law enforcement in general. We need to keep this momentum going.

“There are so many good men and women in law enforcement who are doing a tough job everyday.

“During such an uncertain time for us I want them to experience the same love and support I’ve been shown these last few days. Their lives matter.”

The gofundme page is here.