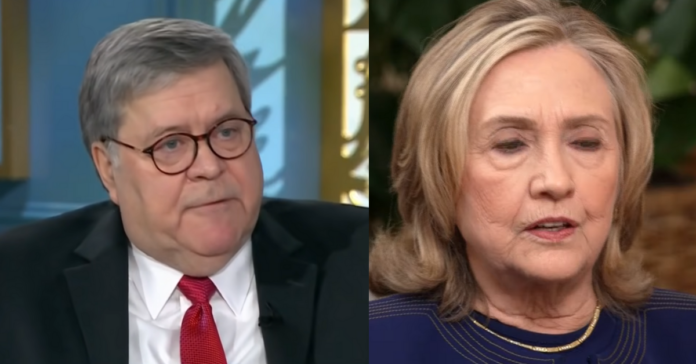 Former U.S. attorney general William Barr issued a warning to Hillary Clinton and the Dems who approved the Trump Russia smear calling it a “seditious” attempt to derail Trump’s presidency and a “grave injustice.”

Barr was on BlazeTV host Glenn Beck’s podcast when he came clean about Hillary Clinton.

“I thought we were heading into a constitutional crisis. I think whatever you think of Trump, the fact is that the whole Russiagate thing was a grave injustice. It appears to be a dirty political trick that was used first to hobble him and then potentially to drive him from office,” Barr said.

“I believe it is seditious,” he added before saying that the charge may be hard to prove in court.

“It was a gross injustice, and it hurt the United States in many ways, including what we’re seeing in Ukraine these days. It distorted our foreign policy, and so forth,” Barr said.

Barr said he named Durham as special counsel in secret to protect him because it would stop Biden and Garland from messing with him.

“I was highly confident he would remain in office and they wouldn’t touch him,” he said.

“The Biden administration had no real interest in protecting either Hillary Clinton or Comey.

“And at the end of the day, for them to lose the capital and appear to be covering something up that would then never get resolved, I didn’t think was in their interest.

“And I think institutionally that would’ve destroyed the new AG if he had tried that.

“If you don’t have the threat of a grand jury, no one will come in and talk to you. You’ll say, the usual thing is, ‘Please come in for a voluntary interview.’

“And people come in because they know if they don’t, they’re subpoenaed.

“But if there is no grand jury, they say, ‘No, I’m not coming in,’ and there’s nothing you can do.

“And people don’t understand that that state of affairs lasted until the month before the election,” Barr said of the pandemic that shut down grand juries and thus delayed Durham’s probe.

“So his hands were very much tied as to how far he could push things and how much pressure he could bring on people through most of 2020.”