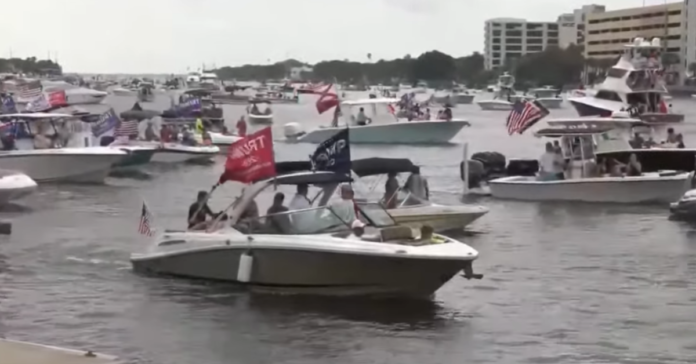 The ‘Trumparilla’ boat parade and another pro-Trump parade saw huge turnouts over the weekend in Tampa Bay, Florida. “We felt that there was a large portion of the community that still wanted to put on Gasparilla, especially the boat parade portion of it,” said Jake Hoffman one the event organizers.

“We wanted to make sure that everybody in the city of Tampa could participate in this,” Hoffman said. “It just so happened that more people that lean on the right are willing to go out and do a boat parade in this situation, so that’s who it’s going to attract.”

“I’ve said it before — if you don’t believe that we should have boat parades, then don’t go,” said Cliff Gephart, who organized a second boat parade called the “Trumparilla Boat Invasion”

“If you do feel that you’re safe enough and your health and family is okay to participate in things that happen in life, then you should participate.”

As to the dueling boat parades Hoffman said, “We just wanted to make sure that the routes aren’t going to run into each other.”

“We tried to coordinate and at least say, ‘hey, your group will meet here. We’re all going to meet and then kind of go together. That’s kind of the plan,” said Gephart.

Two conservative groups set sail Saturday morning in support of an annual Tampa Bay tradition. It was back in February when Ye Mystic Krewe of Gasparilla announced the organization was canceling the event which, in addition to hundreds of boats on the water, hosts a land parade as the main attraction.

The Tampa Bay Young Republicans set up an official (but unofficial) Gasparilla Facebook page to invite people to sail from downtown Tampa to Beer Can Island.

“ARRGHH!” the group wrote. “Pirates don’t cancel invasions and they don’t take orders from tyrants! If the Bucs can throw a boat parade, so can Ye!”

The Facebook invite continues, “please leave politics aside,” though many of the boats were spotted with flags supporting former President Donald Trump in last year’s election.

Because about at the same time as the Young Republicans’ parade, the “Trumparilla” had been scheduled to hit the water.

“The 105th Gasparilla Pirate Festival has been re-imagined with more fun, Patriotism and MAGA!” its website reads.