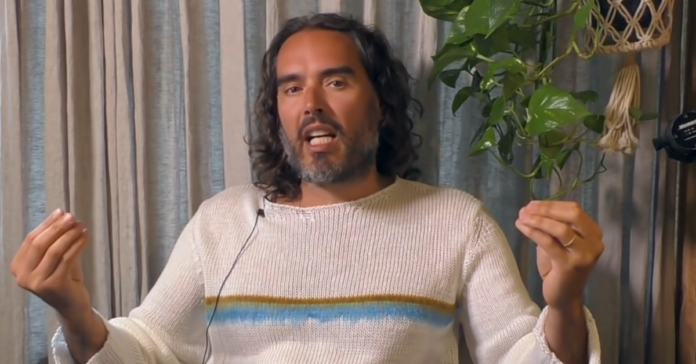 Hollywood star Russell Brand called out the media, big tech, and the Democratic Party for helping bury bad news about the walking scandal Hunter Biden leading up to the 2020 election. Brand said news about Hunter Biden “was stymied, stifled, controlled because it didn’t suit the shared agenda” of Democrats, media, and social media.

“They are not my cultural, social or political allies. That is certainly not how I see myself. However, it seems to me that – what is the reason Hunter Biden sat on the board of an energy company in Ukraine?

“What is the reason James Biden sat on the board, or receiving payments from an energy company in China?

“So, let’s face it: unless you’re bloody stupid, you know that’s going on all the time.

“That should be public knowledge.

“And it’s even more troubling that Twitter, and Facebook, and the media at-large deliberately kept it out of the news because they didn’t want it to influence the election.

“The fact is, that this information was stymied, stifled, controlled because it didn’t suit the shared agenda of these three pillars of power (Democrats, media and social media).

“That almost concerns me more than the nature of the revelations, themselves.

“But, I’m sad to realize that I can no longer even claim to believe that Joe Biden and the Democratic Party might be the answer – because look at how they behaved.

“And, look at the relationships between media, social media and that party that conspired to keep information away from you – because it was not convenient to their agenda.

“What does that make you feel?” he said.

In the final months of the heated 2020 presidential race, The Post revealed a trove of emails from Hunter Biden’s laptop that raised questions about his then-candidate father’s ties to his son’s foreign business ventures, including Burisma, a Ukrainian natural gas company linked to corruption.

The emails revealed that the younger Biden introduced a top Burisma executive to his father, then vice president, less than a year before the elder Biden admittedly pressured Ukrainian officials into firing a prosecutor who was investigating the company.

The water-damaged MacBook Pro — which bore a sticker from the Beau Biden Foundation — was dropped off for repair at a Delaware computer shop in April 2019, but the individual who dropped it off never returned to pick it up.

It was seized by the FBI in December of that year.

In addition to his Ukrainian connections, other emails on the computer showed Hunter discussing potential business deals with China’s largest private energy company.

One deal seemed to draw considerable attention from the younger Biden, who called it “interesting for me and my family.”