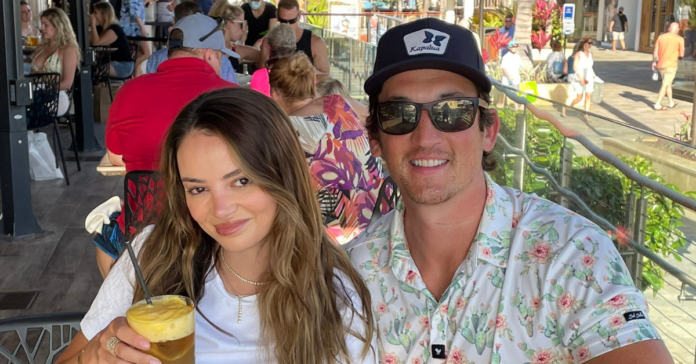 Hollywood star Miles Teller got punched in the face in Hawaii after getting jumped by two random men at a restaurant. Teller confirmed the story on social media: “I got jumped by two guys in a bathroom. Never met them before in my life but ya cool wrestling segue bud.”

Teller has been hanging out with Green bay Packers quarterback Aaron Rodgers in Hawaii as Rodgers demands a trade from Green Bay. Teller at one point during the vacation trolled the Green Bay packers tweeting a picture with this caption: “Cheers to signing with the Packers.”

From People: The Whiplash star was punched in the face outside the restroom of the restaurant Monkeypod Kitchen in Maui, Hawaii on Wednesday night by an unknown man, according to TMZ.

In a statement obtained by PEOPLE, an MPD spokesperson said “police responded to a report of an assault that occurred at a West Maui restaurant involving a male victim and one responsible party. The incident is currently under investigation; no further information is available at this time.”

“I got jumped by two guys in a bathroom. Never met them before in my life but ya cool wrestling segue bud,” tweeted the 34-year-old “Whiplash” star in response to colorful commentator Pat McAfee, who compared the island brawl to a tag-team wrestling match on Friday night’s “Smackdown.”

“Miles Teller got punched in the face in Maui this morning. I don’t think it was as hard as that shot,” joked the announcer.

McAfee later regretted the move, responding to Teller’s tweet, “Miles.. I apologize for not knowing the whole story. I will fix my position and make it right… with that being said, it was a pretty good segue.”

Law enforcement sources tell TMZ … the incident occurred Wednesday at the Monkeypod Kitchen on the island of Maui, where Miles and his wife, Keleigh Sperry, were eating dinner. Sources who were at the restaurant tell TMZ, Miles was in the bathroom when a man confronted him and punched him in the face.

We’re told the 2 got into it outside the bathroom and Miles screamed that he was going to press charges.

Miles and Keleigh left the restaurant … he did not appear to be seriously injured.

We’re told the man who punched Miles was a wedding planner who claimed Miles owed him $60,000 for services he performed for Miles’ wedding in Maui back in 2019. Our eyewitnesses claim the man was complaining to Miles he had not gotten paid.

I got jumped by two guys in a bathroom. Never met them before in my life but ya cool wrestling segue bud

Cheers to signing with the Packers pic.twitter.com/XX8sGc1BY4

Miles Teller on alleged assault in Hawaii: 'I got jumped' https://t.co/HGpUskFKjj pic.twitter.com/5EwFtGdu0H