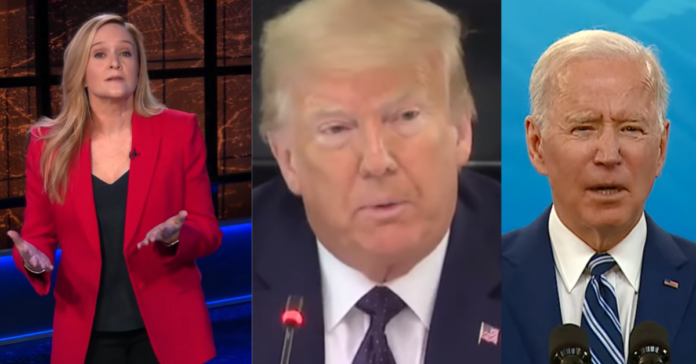 Comedian Samantha Bee, who relentlessly and quite viciously went after former President Donald Trump just gave up the game in a new interview on SiriusXM. She sat for an interview with another gem, Dan Rather, and admitted she goes easy on Biden.

Rather asked Bee, “Do you, or do you not, find yourself sometimes at least tempted to kind of pull your punches? In other words, you, myself, and a lot of people were more or less free-swingers against President Trump.”

“But now that Biden is in, I don’t know, do you find yourself sometimes saying, ‘Oh boy, there’s a nasty comedy bit I can unload on Biden,’ but saying to yourself, ‘I approve of him so much I’m going to pull this punch?'”

Bee said, “I can’t deny that that has happened. I think that’s probably true across the board.”

“You’re like, ‘OK, well, we could be making jokes about the infrastructure plan,’ but in general, I’m like, ‘Wow, this is great.’ Why would I purposefully undermine something that seems to be a great idea, pretty much across the board?” she added.

“I don’t need to make jokes just to make jokes,” she said. “I like to make really targeted jokes. There are more worthy targets right now.”

TBS, which airs Bee’s show, and left-leaning CNN are both owned by WarnerMedia.

Bee certainly didn’t pull punches when it came to Trump and members of his administration.

In 2018, Bee was forced to apologize after calling Ivanka Trump a “feckless c—” over a photograph the first daughter shared on social media.

“I would like to sincerely apologize to Ivanka Trump and to my viewers for using an expletive on my show to describe her last night,” Bee said in a statement. “It was inappropriate and inexcusable. I crossed a line, and I deeply regret it.”

Samantha Bee on comedians and Biden: 'You’re like, ‘OK, well, we could be making jokes about the infrastructure plan,’ but in general, I’m like, ‘Wow, this is great.' Why would I purposefully undermine something that seems to be a great idea?' https://t.co/v8BYg79XGh