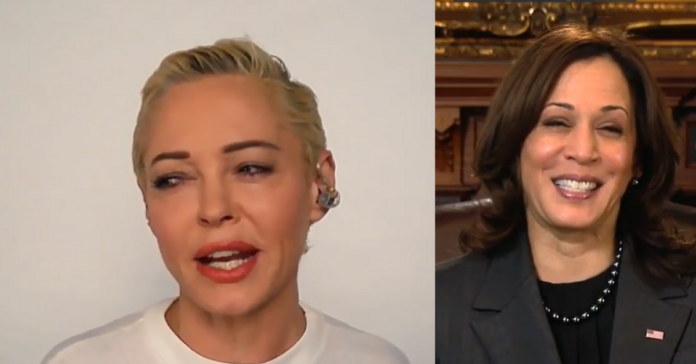 Hollywood star Rose McGowan dropped the hammer on two failed California Dem politicians and she just may have sunk embattled California Governor Gavin Newsom in the process. Rose claimed that Gavin’s wife tried to broker a deal between McGowan and Harvey Weinstein’s lawyer before news broke in 2017 of sexual assault allegations to keep her quiet and Harvey out of jail.

“This woman I don’t know, some blonde lady with a last name of Newsom, cold calls me and is like, ‘David Boies wants to know what it would take to make you happy,'” McGowan said.

“What is being alleged is a complete fabrication,” a Newsom spokesperson said. “It’s disappointing but not surprising to see political opponents launch these false attacks just days before the election.

“Their limited correspondence has been strictly as fellow survivors of sexual assault and in Jennifer’s former capacity leading the Representation Project, an organization that fights limiting gender stereotypes and norms.”

But she saved the most unkind cut for failed and MIA Vice President Kamala Harris saying simply:

“There’s no there there.”

Rose also went after Hillary saying: “Hillary Clinton, you are a shadow leader in service of evil. You are the enemy of what is good, right, and moral. You represent no flag, no country, no soul. You eat hope. You twist minds. I’ve been in a hotel room with your husband and here comes the bomb.”

Hillary said of the new law: “Under the cover of darkness, by choosing to do nothing, the Supreme Court allowed an unconstitutional abortion ban in Texas to go into effect last night.

“Their decision doesn’t change the fact that reproductive rights are human rights. We’ll fight for them.”

“David Boies wants to know what it would take to make you happy…”@rosemcgowan tells me that Gavin Newsom’s wife Jennifer called her on behalf of Harvey Weinstein’s lawyer six months before the Weinstein scandal broke to make the story go away. pic.twitter.com/IG99Pb6tvl

Remember when you @JenSiebelNewsom asked me on behalf of Weinstein’s gross lawyer ‘What it would take to make me happy?’ Gavin Newsom’s wife has some explaining to do. #lizard 🦎 https://t.co/eOcvHY1Krg

As Gertrude Stein famously said, “there’s no there there.” https://t.co/8bGLXMlMSN