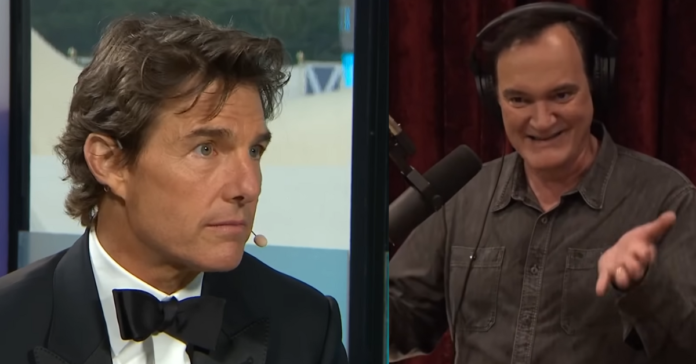 Hollywood legend Quentin Tarantino gave Tom Cruise some high praise when he revealed what he thought about “Top Gun: Maverick” on the ReelBlend podcast this week. Tarantino is considered one of the greatest movie directors to ever live.

“I f*cking love ‘Top Gun: Maverick.’ I thought it was fantastic. I saw it at the theaters. That and Steven Spielberg’s ‘West Side Story’ both provided a true cinematic spectacle, the kind that I’d almost thought that I wasn’t going to see anymore. It was fantastic.”

“There was just this lovely, lovely aspect because I love both Tony Scott’s cinema so much, and I love Tony so much that that’s as close as we’re ever going to get to seeing one more Tony Scott movie.

“Director Joseph Kosinski did a great job. The respect and the love of Tony was in every frame.

“It’s the closest we’re ever going get to seeing one more Tony Scott movie, and it was a fucking terrific one.”

He said the scene with Tom Cruise and Val Kilmer was “almost too cheap, but it absolutely works.

“It’s a bit like Charlie Chaplin dying on stage for the last scene of ‘Limelight’ but it f*cking works.

“You’re waiting for it and the f*cking scene delivers.”

He said of Jaws:

“And then there are other movies that can get in its rarefied air.

“But as far as a movie, there’s no making it better than ‘Jaws.’

“It is the best movie ever made.

“And it shows how badly timed most movies made before ‘Jaws’ were,” he said.

With another over/under $1.1 million on Wednesday, Paramount and Skydance’s Top Gun: Maverick has now grossed $654.2 million in 69 days of domestic theatrical release.

That gives the film another box office miracle, putting it above the unadjusted $653.4 million gross of Universal and Amblin’s Jurassic World. That makes it the eighth-biggest domestic earner of all time, sans inflation, of course, and the third-biggest summer release behind the last two Avengers movies.

“I f*cking love #TopGunMaverick. I thought it was fantastic…it provided a true cinematic spectacle, the kind that I’d almost thought that I wasn’t going to see anymore. It was fantastic," Quentin Tarantino. https://t.co/of9WbkUtr2