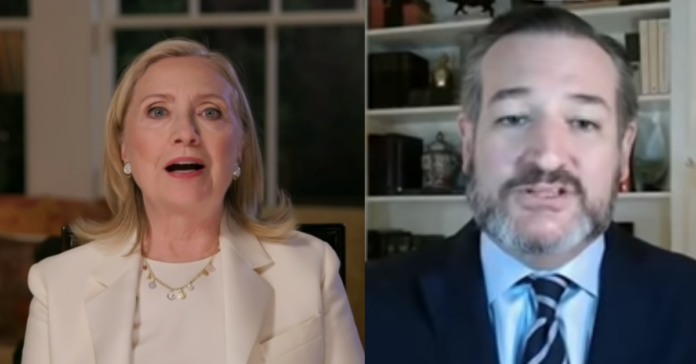 Former Secretary of State Hillary Clinton took a cheap shot at Texas Sen. Ted Cruz (R) because she just can’t help herself. So what if Cruz flew to Cancun, Mexico, to escape the cold? He is not in charge of keeping the grid working.

But she went forward anyway and tried to mock Ted after a report claimed he left his dog behind. Did she think he didn’t leave someone to watch his dog? How obnoxious and embarrassing for Hillary.

“Don’t vote for anyone you wouldn’t trust with your dog,” Clinton tweeted without naming Cruz but the intent was clear.

“It was obviously a mistake. In hindsight, I wouldn’t have done it,” Cruz said about his trip when he came back.

“I was trying to be a dad,” Cruz continued. “And all of us have made decisions — when you got two girls who have been cold for two days and haven’t had heat or power and they’re saying, ‘Hey look, we don’t have school, why don’t we go. Let’s get out of here.’

Cruz has received widespread bipartisan condemnation after it was reported Thursday morning that he had flown to Cancun while millions of Texas homes go without heat or electricity. The Houston Police Department later confirmed that officers had assisted Cruz in traveling to the airport.

Cruz arrived back in Texas on Thursday after reportedly booking an earlier ticket back from Cancun. He had reportedly planned to stay in Mexico until Saturday.

Calls have come in from Texas Democrats for Cruz to resign after reports of his trip surfaced.

Cruz also received backlash this week after tweets resurfaced of the senator mocking power outages in California. He later responded to the online outrage saying he had “no defense” for the statements.

The Texas power grid is separate from the two other major U.S. power grids and is not equipped to handle the freezing temperatures that have swept across the U.S. this week. Many Texans have found themselves without power, with pipes bursting and perishable food items expiring.

Don't vote for anyone you wouldn't trust with your dog.

Just to clarify, this was taken around 1pm central on Thursday. It's possible Ted brought the poodle back from Cancun with him, or that a family member was staying behind to take care of the dog.

When Ted Cruz left for Mexico the power was out. His wife Heidi texted a friend it was freezing. While he was gone the power came back. So Snowflake was in the cold for part of a day, but it could well have been longer. Ted left a security guard to take care of Snowflake.