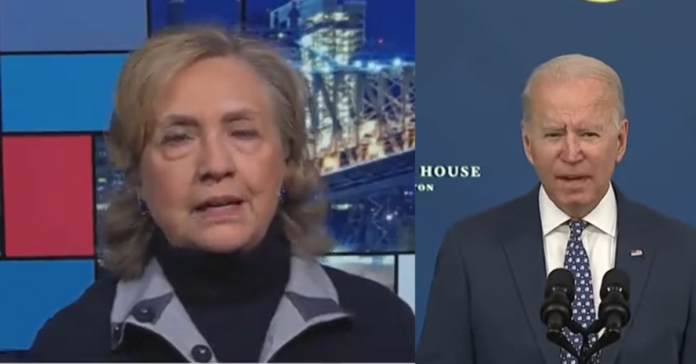 Hillary Clinton gave up the game on MSNBC’s Rachel Maddow show seeming to blame American voters for understanding or appreciating Biden’s accomplishments. She thinks we need to go back the days when the ‘gatekeepers’ like the New York Times lied us into war in Iraq.

Hillary’s failed 2016 presidential campaign is also accused of being involved in the biggest disinformation campaign in American history, the Trump Russia hoax. Remember too that Biden and the Dems haven’t really done anything in the first year.

She cites the first stimulus bill passed last spring that gave everyone an additional thousand or so dollars to show our American voters just don’t appreciate Biden.

We know about that bill, it directly led to the massive inflation we are seeing today. And we know about the infrastructure bill they just passed and that it will take years before shovels hit the ground.

We have been watching, Hillary, we don’t like what we see with Joe Biden. That is why Biden has some of the lowest poll numbers ever seen.

It’s not that we are too dumb to appreciate Biden, we are too smart to fall for any more lies from the Dem Party and the media outlets they control.

“You know, democracy is messy. You know, a lot of people got, oh I think, kind of frustrated looking at the messy process of legislation.

“And they didn’t really appreciate that, within a year, the Biden administration has passed two major pieces of legislation through both the House and the Senate.

“By any measure those are extraordinary accomplishments.

“But because of the way we are getting our information today, and because of the lack of gatekeepers and people who have a historic perspective who can help us understand what we are seeing, there is a real vulnerability in the electorate to the kind of demagoguery and disinformation that, unfortunately, the other side is really good at exploiting,” she said with a straight face.

“Well, we certainly need new rules for the information age, because our current laws, our framework, it is just not adequate for what we are facing.

“I want to mention one other thing that is on the horizon, that people are only beginning to pay attention to.

“There are so many big questions that the Biden administration must address, I just don’t think we have much time and therefore, I hope, from everything I’me hearing from them, that’s exactly what they’re going to try do,” she said.

"What we've seen, sadly, in the last several years, is not new in our history … but it is, unfortunately, turbo-charged by the combination of demagogues, social media…" -Hillary Clinton on an old problem with a new twist pic.twitter.com/QHvbsD4GSz

"I do think that we are facing a crisis of democracy, crisis of legitimacy," Hillary Clinton says on threats to democracy. "The increasing ability to manipulate people through algorithms and other forms of artificial intelligence will only make this harder to combat." pic.twitter.com/QX5xR4I5Iu

The fight to preserve our democracy is a worthy and necessary battle. We can never give up because the stakes are simply too high. https://t.co/MXtURDrjYF