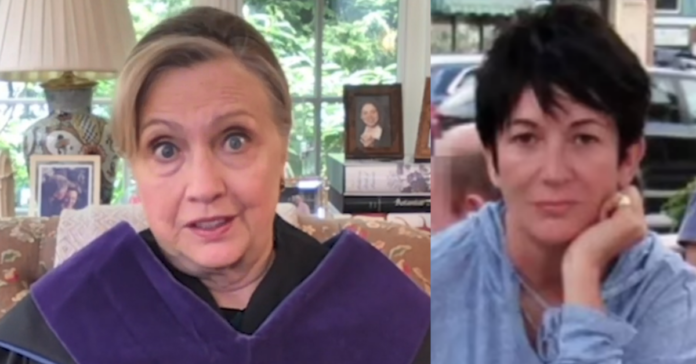 The plot thickens and Hillary Clinton may have some explaining to do. It seems that ex-Secretary of State Hillary Clinton hired Ghislaine Maxwell’s nephew, Alexander Djerassi, for her campaigns and for a job at the state department when she was running it.

According to his LinkedIn job history he worked on Hillary’s campaign in 2008, he worked for the State Department when she was there, and he worked for her failed 2016 campaign.

The guy went to all the right schools and his family is obviously connected and wealthy but still, the Clinton’s and Maxwell/Epstein have a weird relationship.

The report also appears to reference Djerassi’s LinkedIn profile, which lists his role as chief of staff for the “Office of the Assistant Secretary of State, Bureau of Near Eastern Affairs” from May 2011 to June 2012. Djerassi served as special assistant to the office from May 2009 to May 2011, his online profile says.

Djerassi was also a nonresident associate at the Carnegie Endowment for International Peace. A biography on the endowment’s website states Djerassi’s research “focused on Tunisia and U.S. foreign policy toward the Middle East and North Africa.” The bio adds, “From 2009 to 2012, Djerassi was chief of staff and special assistant in the U.S. Department of State’s Bureau of Near Eastern Affairs, covering U.S. relations with Arab states, Israel, and Iran.

He worked on matters relating to democratization and civil society in the Arab world, the Arab uprisings, and Israeli-Palestinian peace.”

“Djerassi has served as a U.S. representative to the Friends of Libya conferences, Friends of the Syrian People conferences, U.S.-GCC Strategic Coordination Forum, and several UN General Assemblies,” the profile concludes.

The role at the State Department wasn’t the nephew’s only Clinton-related gig.

From September 2007 to June 2008, Djerassi was a policy associate for Hillary Clinton’s presidential campaign. He listed his job duties as such: “Researched and drafted memos, briefings, and policy papers for candidate, senior staff, and news media on wide range of domestic and foreign policy issues. Prepared for more than 20 debates.” (In late 2007, Epstein was under investigation for trafficking girls in Palm Beach and working on a secret plea deal with federal prosecutors. Maxwell is believed to be one accomplice who was protected under the controversial agreement.)

Djerassi lists a job as “national security policy planner” for the “Clinton-Kaine Presidential Transition Team” in 2016.

Maxwell’s and Epstein’s connections to the Clintons have faced greater scrutiny after Epstein was arrested in July 2019 for his years-long child sex trafficking scheme.