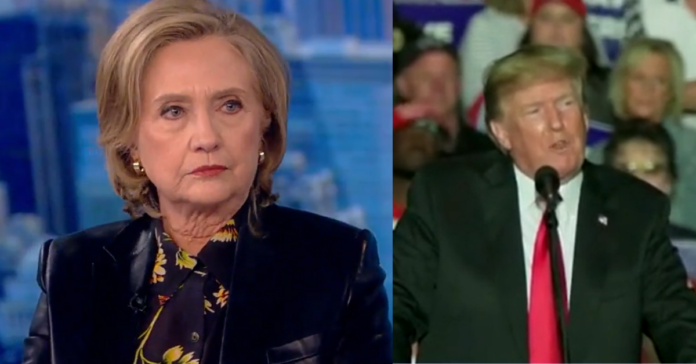 Former Secretary of State Hillary Clinton came clean and said that if Trump wants the 2024 Republican presidential nomination, he will get it. During an appearance on ABC’s “The View” on Monday, Clinton said:

“If Trump wants to be the nominee he will be the nominee. I don’t think there’s any doubt about that. And I think that everybody else who is talking about it or considering it understands that.

“It says volumes about the Republican Party today. That someone who has the record of attacking our own government, of lying to people about the biggest health crisis that we’ve had in over 100 years is considered the leader because they’re all afraid of the mob that he has created and that he keeps energized.”

During an interview with ABC News’ “Good Morning America” Hillary said: “I will never be out of the game of politics. I’m not going to be running for anything. I really feel our democracy is at stake, and there’s many reasons for that.

“Some of them we saw on the screen with the insurrection, some of them because of the revelations about Facebook that creates a world of disinformation instead of, you know, one that we can agree on what the facts are.

“I really am worried about what’s happening at home and around the world.

“So, I’m never going to get out of, you know, being involved, worried and hopefully, trying to help in some way,” she said.

There is a reason Hillary lost twice, arrogance and entitlement blinded her from reality. It seems she has learned nothing.

Hillary’s (and the establishment) failed, quite naive, policies are the problem. The current supply chain chaos will get worse, most experts are predicting, and while COVID may have played a role in starting it if we had not outsourced everything we would be able to fix it quickly and on our own.

Jon Stewart says former President Trump has “a very good chance” of winning back the White House if he enters the 2024 race.

“I think he’s got it — he’s got a very good chance. And they’re smarter about it,” Stewart said Sunday during an interview with David Remnick at the 22nd annual New Yorker Festival.

“The danger of the coup — again, Jan. 6 is the TV event moment of it,” the host of “The Problem with Jon Stewart” on Apple TV+, said of the riot by Trump supporters at the Capitol earlier this year. “It’s the special that came out. And that’s what all the TV networks were focused on.”

“He’s brilliant at understanding what will drive the television narratives,” Stewart said, referring to Trump.

Stewart also predicted that if Trump runs again, it will “all be about Jan. 6 and ‘Stop the Steal.'”

“But what I think they really learned from this exercise was there are really specific pivot points within the American electoral system, and those pivot points are generally the administration of elections run by partisans, but not ideologues,” he said.

The “actual danger of what happened” at the Capitol in January, Stewart added, “is that it exposed a fragility at a level that is not flashy, or sexy, or known.”

.@HillaryClinton: “If [Trump] wants to be the nominee he will be the nominee.”
“It says volumes about the Republican party today. That someone who has the record of attacking our own government… is considered the leader because they’re all afraid of the mob that he has created.” pic.twitter.com/6uEGgtSmNn