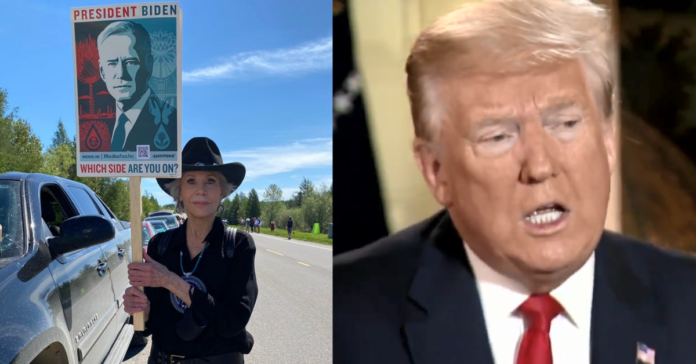 “He’s done a lot and we’re really grateful. But the crisis is too severe to do a few good things here and then not do anything where bad stuff is happening.” She went on trash Trump saying his administration made errors when approving the pipelines accusing the admin of not following the proper permit guidelines. “It was rushed through,” she said. “There wasn’t a proper environmental impact study done.”

“There are a lot of reasons why line three from the Enbridge Canadian oil company is bad. It’s bringing very destructive tar sands under 200 bodies of pristine water,” she said.

“We are barreling toward a true catastrophe, an existential catastrophe which is the climate crisis,” Fonda said. “Climate scientists are universally telling us we have to cut our emissions in half and we can have absolutely no new development of fossil fuels.

She continued, “No new mining. No new fracking. No new drilling if we’re going to achieve this. We have to keep warming at 1.5 degrees Celsius, no higher than that. We can’t even burn what we already develop much less new.”

She said the new pipeline is “threatening what science is saying. It’s threatening the climate crisis.

“This is going to affect everybody, not just the tribal nations whose sovereign rights are being broken here in Minnesota but the whole world.”

“They do their drilling and fracking in areas where people are economically depressed,” she claimed.

She continued: “They create child care centers and recreational parks and they build schools and they try to buy them off.

“But we, again, are confronting an existential crisis. It’s not just the tribal nations here. It is the globe. We have to stop all new oil development.

“We cannot allow this to happen. It’s not just for us living today. It’s for our grandchildren and our children.”

“The scientists say we have less than nine years to cut our emissions in half.

“Line three is going in the absolute opposite direction. And the news every day is telling us, emissions are going up, not down.

“So we have to put our bodies on the line and do whatever we can to get our administration to call a halt to these permits.”

Actress @Janefonda calls on Biden to stop the construction of the Line 3 pipeline, adding that the President has "done a lot of very good things. But not enough. Not bold enough. And not fast enough." pic.twitter.com/v3ANSHL39z

Jane Fonda: "[President Biden has] done a lot of very good things. But not enough. Not bold enough and not fast enough. We're up against time. The scientists say we have less than nine years to cut our emissions in half." pic.twitter.com/hNkp6NLOtE

“It’s much better to push a moderate than to fight a fascist, right?” pic.twitter.com/HFMHhlL8vt