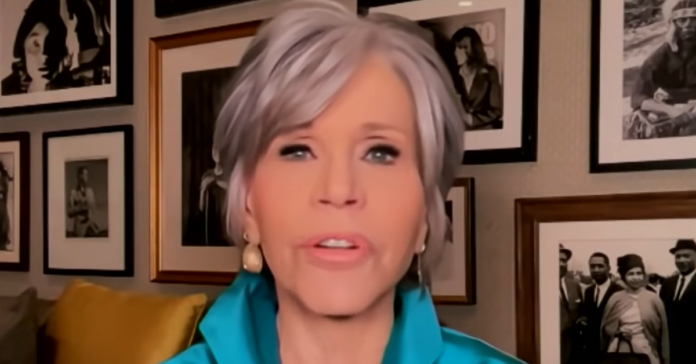 Hanoi Jane Fonda had a meltdown after the Supreme Court overturned Roe v Wade and offered the Dems a crazy plan to get around the ruling that will not work. She said:

“If a corporation can be defined as a person, why not redefine vaginas as AK47s. That way they’d be free of governmental restrictions by those who care about the sanctity of life.”

Fonda said before the decision: “And if it does overturn, fight like hell through the vote. One of the things that this horrendous leak shows us is the importance of voting. The Republicans complain about activist Supreme Court, activist lawyers.

“This is the most activist, politically oriented, narrowly focused Supreme Court in United States history, so we have to vote.

“We have to mobilize to get out the vote in the midterm elections and in 2024 to make sure that we don’t put in office anyone who does not support a woman’s right to choose and doesn’t understand the crisis called the climate crisis, which we have only eight years to address,” she said.

Justice Kavanaugh wrote when he voted to overturn Roe:

I write separately to explain my additional views about why Roe was wrongly decided, why Roe should be overruled at this time, and the future implications of today’s decision. Abortion is a profoundly difficult and contentious issue because it presents an irreconcilable conflict between the interests of a pregnant woman who seeks an abortion and the interests in protecting fetal life.

If a corporation can be defined as a person, why not redefine vaginas as AK47s. That way they’d be free of governmental restrictions by those who care about ‘the sanctity of life’.

The interests on both sides of the abortion issue are extraordinarily weighty. On the one side, many pro-choice advocates forcefully argue that the ability to obtain an abortion is critically important for women’s personal and professional lives, and for women’s health.

They contend that the widespread availability of abortion has been essential for women to advance in society and to achieve greater equality over the last 50 years.

And they maintain that women must have the freedom to choose for themselves whether to have an abortion.

On the other side, many pro-life advocates forcefully argue that a fetus is a human life. They contend that all human life should be protected as a matter of human dignity and fundamental morality. And they stress that a significant percentage of Americans with pro-life views are women.

When it comes to abortion, one interest must prevail over the other at any given point in a pregnancy.

Of course, many Americans are conflicted or have nuanced views that may vary depending on the particular time in pregnancy, or the particular circumstances of a pregnancy.

To be sure, this Court has held that the Constitution protects unenumerated rights that are deeply rooted in this Nation’s history and tradition, and implicit in the concept of ordered liberty.

But a right to abortion is not deeply rooted in American history and tradition, as the Court today thoroughly explains.

I join the opinion of the Court because it correctly holds that there is no constitutional right to abortion. Respondents invoke one source for that right: the Fourteenth Amendment’s guarantee that no State shall “deprive any person of life, liberty, or property without due process of law.”

The Court well explains why, under our substantive due process precedents, the purported right to abortion is not a form of “liberty” protected by the Due Process Clause.

Such a right is neither “deeply rooted in this Nation’s history and tradition” nor “implicit in the concept of ordered liberty.” Washington v. Glucksberg, 521 U. S. 702, 721 (1997) (internal quotation marks omitted). “[T]he idea that the Framers of the Fourteenth Amendment understood the Due Process Clause to protect a right to abortion is farcical.”

I write separately to emphasize a second, more fundamental reason why there is no abortion guarantee lurking in the Due Process Clause.