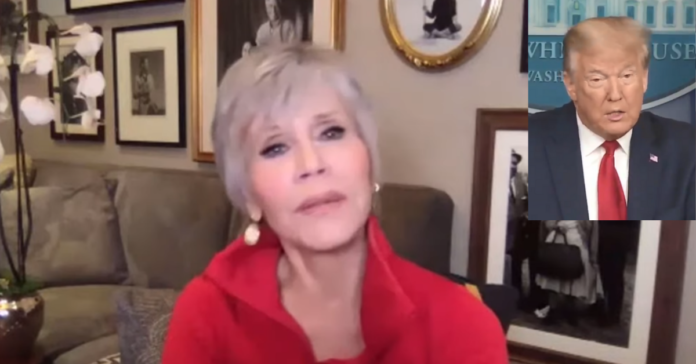 Hanoi Jane Fonda just disgraced herself with some shocking comments about the pandemic. She said it was God’s gift to the left.

“We are people who can help determine which way humanity goes. What a great gift, what a tremendous opportunity, we’re just so lucky, we just have to use it with every ounce of intelligence and courage and wherewithal we have,” Fonda said in a Zoom video posted online.

“I just think COVID is God’s gift to the left,” Fonda said while she smirked for the camera.

“That’s a terrible thing to say. I think it was a very difficult thing to send down to us, but it has ripped the Band-Aid off who Trump is and what he stands for and what is being done to average people and working people in this country,” she added.

“We can see it now, people who couldn’t see it before, you know, they see it now and we have a chance to harness that anger,” she said.

What an absolute disgrace.

Not that Hanoi Jane would care, but we got some good news regarding Trump’s health today. From Fox News:

White House physician Dr. Sean Conley said in a new memo on Wednesday that President Trump has been “fever-free” for four days and has not had any symptoms of the novel coronavirus for “over 24 hours.”

“The President this morning says ‘I feel great!’,” Conley wrote in a memo to press secretary Kayleigh McEnany. “His physical exam and vital signs, including oxygen saturation and respiratory rate, all remain stable and in normal range.”

Conley added that the president has “now been fever-free for more than 4 days, symptom-free for over 24 hours, and has not needed nor received any supplemental oxygen since initial hospitalization.”

The update comes after the president was discharged from Walter Reed National Military Medical Center, and returned to the White House on Monday evening, where he is continuing to be treated for COVID-19.

The president faced health scares throughout his battle with COVID-19, including two instances in which his blood oxygen level dropped suddenly. Doctors treated the president with a dose of the steroid dexamethasone in response.

Conley said that Trump had a “high fever” and a blood oxygen level below 94% on Friday and during “another episode” on Saturday.

But by Saturday, Conley said the president’s cardiac, kidney and liver functions were normal, and that the president was not on oxygen and was not having any difficulty breathing or walking.