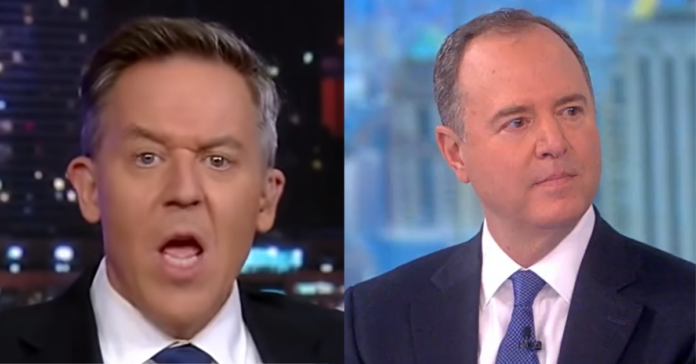 Greg Gutfeld dropped the hammer on Adam Schiff over his 5 years of pushing the Russia hoax against Donald Trump demanding Adam be held to account.

It should shame the mainstream media that a guest host in The View, Morgan Ortagus, did a better job of questioning Schiff than any major reporter at a major news outlet.

Greg said: “I’m disgusted by him. But he didn’t do this by himself. If you think about 2016 and 2020, the number of hoaxes that were created by the Democrats but were engineered by the media. You have the fine people hoax, Russian hoax, the drinking bleach hoax, the white supremacy movement hoax. What happened to that? All these things.

Geraldo Rivera asked Greg if he was talking about “the hooker’s in the hotel room hoax?”

“Well that’s the Christopher Steele dossier and that is the Russian collusion.

“That’s how it started. So, all these things did untold damage to so many people.

“Republicans used to be pro-FBI, pro-DOJ, pro-CIA. Now they are as radical as Abbie Hoffman. “Like we’re all on the same side as Glenn Greenwald and Matt Taibbi.

“Because we all now saw what they had seen years ago.

“My question is, where is the legitimate reckoning for this five-year hoax?

“Cause clearly he’s not going to be voted out.

“And, by the way, why does this guy keep saying erection instead of insurrection? What’s up with that?”