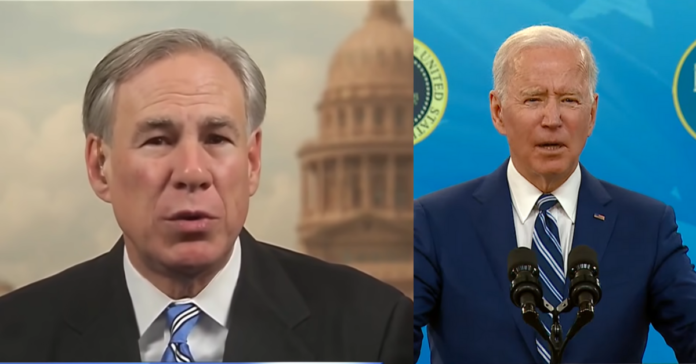 Texas Gov. Greg Abbott put Joe Biden and Kamala Harris on notice over the crisis at the border revealing that Biden has not allowed state officials to visit a migrant facility in San Antonio to investigate claims of child sexual assault.

Abbot said, “Yesterday two state agencies in Texas, the Health and Human Services Commission, as well as the child protection agency, they each separately received complaints that included allegations about the sexual assault of a child.

“When I tell you that, no, those words were not used. What was used instead was a very specific description about ways in which children are being sexually assaulted. Where it was happening, who was doing it, and the horrific things that were being done that I cannot tell you on TV.

“Here’s my point: The Biden administration knows about this. They knew about it yesterday because we shared the information with them, and still nothing is happening.

“Because it’s happening there, it could very well be happening at these other child detention centers. The Biden administration right now, they are saddled with child sex assault allegations and doing absolutely nothing about it.

“That’s exactly why yesterday I requested the Biden administration shut down this location.

“Let me tell you something else that’s really amazing, because I looked at that location: I did not see any security personnel at all.

“There was not a law enforcement officer, [or] anybody else who seemed like they were a person in charge of or even dealing with securing this location.

“These could be very dangerous places for these kids who have traveled through Mexico — Who knows what may have happened to them along the way? — only to maybe repeat assaults they were victims of on the treacherous pathway to the United States.

“They [Biden administration] are not allowing anybody in. The only people who went in were the Texas Rangers who went in with me, but they were not allowed to ask any questions that would investigate the child sexual assault allegations.

“What the Texas Rangers are doing, they’re the lead investigative agency in the state of Texas, and they are going to get to the bottom of this real quick.

“ They have been involved in child sexual assault allegations in the past and they always are able to prosecute it when it occurs.

“They are undertaking the investigation as we speak right now, regardless of any type of blackout that the Biden administration tries to put on this issue,” Abbott said.

The Biden Administration is saddled with child sexual assault allegations and doing absolutely NOTHING about it.

I sent the @TxDPS & the TX Rangers to investigate these allegations. If a crime has occurred, TX law enforcement will ensure it’s discovered and prosecuted. pic.twitter.com/0c9azkykE0

Allegations that migrant children at a Texas shelter may have been sexually abused need to be investigated, Congresswoman Veronica Escobar says – but she added that Gov. Gregg Abbott, who raised the claims, has "zero credibility" in her view. https://t.co/5tDhoKEcTO

Fantastic night with the @HarrisCountyRP!

Had the honor of introducing the great Governor of South Dakota, @KristiNoem. pic.twitter.com/pIWVINo10h