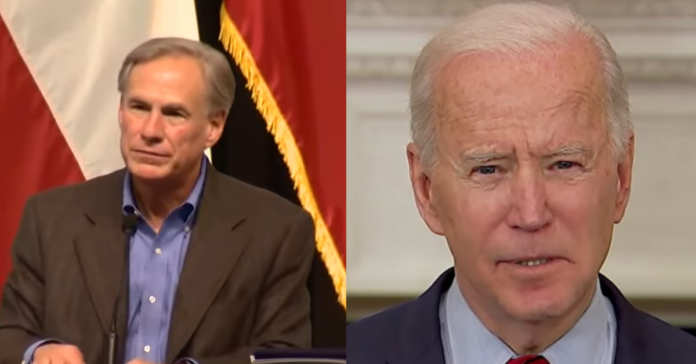 Gov. Greg Abbott just overruled Joe Biden and Kamala Harris and announced that he will build a border wall along the state’s boundary with Mexico rather than wait for the feds to do their job.

“It will help all of us to work on ways to stem the flow of unlawful immigration and to stem the flow of illegal contraband,” Abbott added. Abbott announced the news today while discussing a bunch of new border initiatives. Those included a $1 billion allocation for border security in the state budget and establishing a Governor’s Task Force on Border and Homeland Security.

He was surrounded by officials from the National Guard, Texas Department of Public Safety and Texas Division of Emergency Management when he made the announcement.

From The Texas Tribune:

Abbott has blamed the recent surge of migrants to the Texas-Mexico border on the Biden administration’s immigration policies, claiming in a disaster declaration this week that new federal policies have paved the way for “dangerous gangs and cartels, human traffickers, and deadly drugs like fentanyl to pour into our communities.”

During his first months in office, Biden paused border wall construction started under former President Donald Trump and ordered a review of the Trump administration’s Migrant Protection Protocols, which required asylum seekers to wait in Mexico until their cases could be heard in U.S. immigration courts.

The Biden Administration has referred to its new policies as a way to be more humane toward migrants.

Details such as costs and location were not immediately said by the governor as there are plans for an announcement.

The governor and other law enforcement agencies took part in a summit on Thursday about security along the southern border.

During the summit, Abbott also announced initiatives to address border concerns such as creating the Governor’s Task Force on Border and Homeland Security, as well as a $1 billion allocation towards border security.

Abbott blamed the Biden administration’s policies for the surge in migrants coming into Texas.

Governor Greg Abbott said on Thursday that Texas will build a border wall.https://t.co/0Ikz9BV1Om