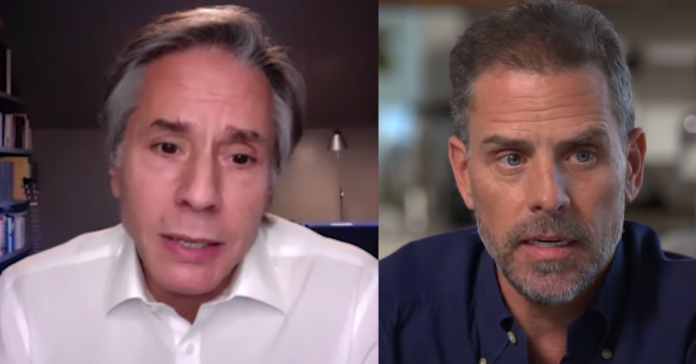 A skeleton, the first of many you can be sure, just crawled out of Joe Biden’s pick for Secretary of State Antony Blinken’s closet and climbed into the lap of Hunter Biden.

According to a report from Fox News, after Hunter took the lucrative, no-show, and very shady job with Burisma, the hopelessly corrupt Ukrainian company, he reached out to Blinken for advice.

Sens. Chuck Grassley, R-Iowa, and Ron Johnson, R-Wis. have the emails and they want answers.

Look, the media needs to do its job with Biden. The media can’t take it easy on Biden and the Dems like they did during the campaign.

They went after Trump viciously and if they want to have any credibility they will hold Biden to account.

New Secretary of State pick Antony Blinken has a long-standing relationship with President-elect Joe Biden going back to their days in the Obama administration, but State Department emails revealed that during that time Blinken appeared to have made a connection with Hunter Biden as well.

In the weeks leading up to the 2020 election, Hunter Biden was the subject of reports about business dealings in Ukraine and China and possible links to his father. Records show that the younger Biden also had ties to Blinken, having scheduled meetings with him while he was on the board of Ukrainian energy firm Burisma and Blinken was deputy secretary of state.

“Have a few minutes next week to grab a cup of coffee? I know you are impossibly busy, but would like to get your advice on a couple of things,” Hunter Biden said in a May 22, 2015 email to Blinken that the State Department released in 2019, pursuant to a Freedom of Information Act request.

“Absolutely,” Blinken replied. Several emails followed discussing logistics. A separate email from Blinken’s assistant on May 27, 2015, listed his schedule for that day. It included a meeting with Hunter Biden set for 3:30 p.m.

Records related to that meeting and another in July 2015 raised concerns from Sens. Chuck Grassley, R-Iowa, and Ron Johnson, R-Wis., who asked the State Department for more information.