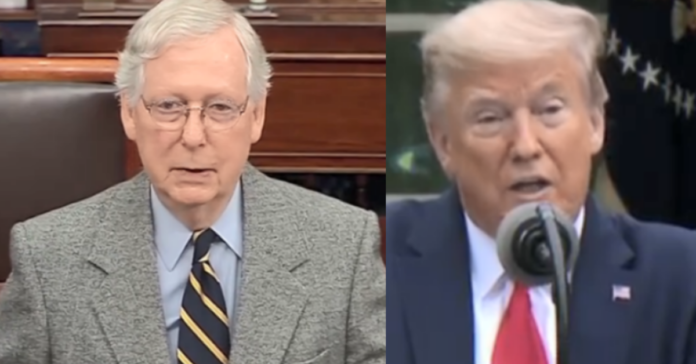 The Senate passed a resolution on Thursday by unanimous consent smacking President Trump for his comments about a peaceful transition of power should Trump lose in the November election.

“It’s a shame that we have to come and reaffirm our commitment to our country, our Constitution, and who we are as a people. Sometimes we hear things that challenge that and we heard that yesterday and we were very concerned about that,” said Joe Manchin who sponsored the bill.

Look, Trump needs to clean this up and quickly because this election is tight. The polls are not only tightening as they do around this time but Trump is leading in some.

After the conventions pollsters switch from registered voters to likely voters. A lot of these are Trump voters who don’t always vote. The Trump campaign complained all summer that pollsters were using the wrong methodology to show them behind.

It looks like Trump was right, at least on a few polls that have made the switch although we will know more when we see more polls.

But if he doesn’t clean this up he may get crushed by independents meaning he will get destroyed in November.

The swing voters are even smaller by % this year as many have made up their minds, saying what Trump said, even if he was trying to work the refs as he did with Mueller and what he is doing with Chris Wallace right now, could hand those voters to Biden.

McEnany came out and said TTump wpuld support a free and fair election and TRump came out later and said he will accept any Supreme Court ruling but it may not be enough. He needs to come out and really clean up what he said or it may hurt him in November. Trump said,

The Senate passed a resolution on Thursday reaffirming its support for a peaceful transition of power, one day after President Trump refused to commit to such a transition next year if he loses in the November election.

The resolution, offered by Democratic Sen. Joe Manchin (W.Va.), passed by unanimous consent, meaning no senator objected to it.

“It’s a shame that we have to come and reaffirm our commitment to our country, our Constitution and who we are as a people. … Sometimes we hear things that challenge that and we heard that yesterday and we were very concerned about that,” Manchin said from the Senate floor.

In the non-binding resolution, the Senate reaffirms “its commitment to the orderly and peaceful transfer of power called for in the Constitution of the United States.”

It also throws the Senate’s support behind the idea that “there should be no disruptions by the president or any person in power to overturn the will of the people of the United States.”

The winner of the November 3rd election will be inaugurated on January 20th. There will be an orderly transition just as there has been every four years since 1792.

The peaceful transfer of power is enshrined in our Constitution and fundamental to the survival of our Republic. America’s leaders swear an oath to the Constitution. We will uphold that oath.