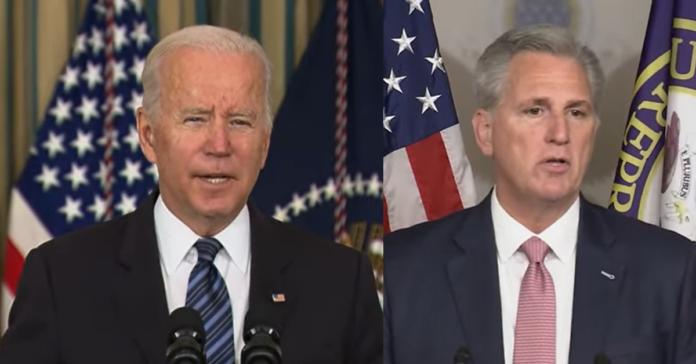 President Joe Biden and the Dem Party saw sweeping losses in Tuesday’s election. In Seattle, a GOP candidate won for the first time since 1989. In Texas, the GOP flipped a Hispanic district that went for Biden by double digits red.

In Virginia, the GOP swept to power while a retired truck driver beat the second most powerful Dem in the state of New Jersey spending less than $200. It was a wipeout for the Dems and to make it worse, the Dems were imploding trying to pass Biden’s agenda.

Pelosi, in the clearest sign yet that she is a lame duck, could not hold her caucus in line and saw a revolt from AOC and 5 others. If they blocked the passing of Biden’s infrastructure it would have been a total humiliation for the admin.

Taken with what happened Tuesday, the Dems may not have recovered from such a devastating loss. Enter the GOP. They gave Biden and Pelosi the votes needed to avoid a very public humiliation.

The Republicans voting yes were:

The 13 GOP votes gave Speaker Nancy Pelosi the numbers to pass the bill despite no-votes from six liberal Democrats who held out trying to secure a bigger version of the companion Build Back Better social spending package.

They included a combination of lawmakers who are retiring and who will seek re-election. Some did — but most didn’t — vote to impeach former President Trump over the Jan. 6 insurrection.

What they’re saying: “I weakened their hand. They have n0 leverage now,” said Rep. Nicole Malliotakis (R-N.Y.), who had shaped a GOP-friendly spin on her vote by the time she exited the chamber: “I voted against AOC and the squad tonight.”

Malliotakis told Axios that progressives will no longer be able to hold the bill hostage and predicted Build Back Better will be “drastically weakened” in the Senate or “die altogether” as a result of the infrastructure bill passing.

A damned-if-you-do, damned-if-you-don’t choice is what Rep. Don Bacon (R-Neb.) told Axios he faced, so he said he did what felt right. “You vote one way, maybe it hurts in the primary. You vote the other way… in my district, it’d hurt me in the general.”

A resounding win in Virginia, a president with historically low approval ratings who has messed up Afghanistan, energy, supply chains inflation, and the border

And the GOP responds by handing Democrats a major legislative victory

These are the 13 RINOs who voted yes: