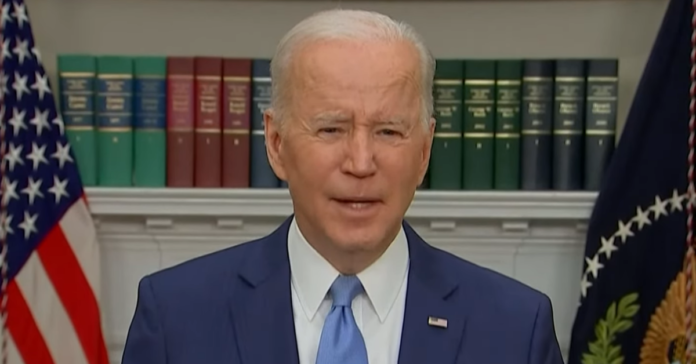 Almost 40 Republican members of Congress are calling on President Biden to take a cognitive test like the one taken by former President Donald Trump over concerns with Joe Biden’s ability to do the job.

The lawmakers wrote that they “believe that, regardless of gender, age, or political party, all Presidents should follow the example set by former President Trump to document and demonstrate sound mental abilities.”

“While you underwent your annual physical exam on November 19, 2021, you either did not face a cognitive test or those results were withheld from the public,” they wrote before adding they “are worried about your mental abilities.”

“The Alzheimer’s Association lists ‘changes in mood and personality,’ including being more ‘easily upset’ as one of ten signs of mental decline,” they wrote.

“You displayed this type of mood change during a cabinet meeting on January 24, 2022, when you apparently did not know your microphone was on after finishing your opening remarks, and you called a White House reporter a ‘stupid son of a b—-’ in response to a question he asked on inflation.”

“My colleagues and I are again asking President Biden to immediately undergo a formal cognitive screening exam, such as the Montreal Cognitive Assessment (MOCA).

“As a former physician to three Presidents of the United States, I know what it takes mentally and physically to execute the duties of Commander-in-Chief and Head of State.

“Joe Biden has continually proven to me and to the world that something isn’t right.

“The American people deserve to have absolute confidence in their President’s cognitive ability.

“This is not a partisan issue. When I discussed taking a cognitive test with President Trump, he was eager to assure the American people and to put the fake news media’s stories to bed.

“Why won’t President Biden do the same?

“We can only assume the worst if he doesn’t submit to the same standard that his own party demanded of the last Administration.

“The precedent has been set.”

“I was a White House physician to three U.S. Presidents, and I can tell you something isn’t right with Joe Biden’s cognitive state. My colleagues and I are AGAIN asking Biden to take a cognitive test!”

I was a White House physician to three U.S. Presidents, and I can tell you something isn’t right with Joe Biden's cognitive state. My colleagues and I are AGAIN asking Biden to take a cognitive test!