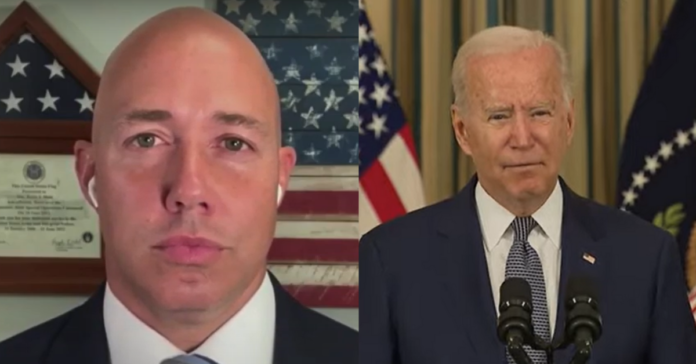 Representative Brian Mast (R-FL), a combat veteran, said on Fox News Channel’s “Sunday Morning Futures” that President Joe Biden should be impeached for treason over the debacle in Kabul.

Mast said” “Impeachment is absolutely something that should be considered. I would say no less than 10,000 counts of reckless endangerment, all of the American lives over there. That’s the minimum. That is the real crime.

“We know for a fact that the Taliban is the sworn enemy of the United States of America. We are still in the midst of the war on terror, and as I said, I would absolutely consider the manipulation of intelligence, giving aid and comfort to the enemy. All three of those things are part of what meets the constitutional definition of treason.

“You look at President Biden, and I would say these two things about him. He is hollow. His decisions are empty.

“They are void of wisdom in their entirety. Across the board, we see a naïveté to the aggressors he’s dealing with.

“Maybe there is an element of dementia there that we might hear about in years to come. But I would say at a minimum, this man appears to be schizophrenic with the statements that he’s making in front of one camera and the way that they are changing in front of a camera on a different day or a day after that and with what members of his cabinet are saying.

“There’s definitely got to be schizophrenia there.

“Speaker Pelosi had members of Congress back about a week ago to not touch anything related to Afghanistan and not say a word about it and not even to thereafter allow to read the names of those that were killed in Afghanistan a few days after she called all members back.

“None of that occurred.

“It was simply to pass a $3-4 trillion spending bill and take the rights away to conduct their election laws.

“That’s where their head is at,” he said.