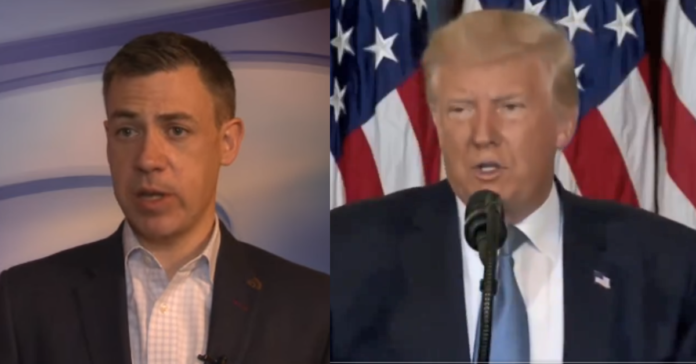 Rep. Jim Banks (R-IN) has had enough and will introduce legislation this week to strip convicted rioters of federal unemployment benefits.

“Antifa thugs are descending on suffering communities, disrupting peaceful protests and leaving violence, looting, and vandalism in their wake,” Banks said in a statement.

“They turned Milwaukee, Seattle, and Portland into warzones, and now they’re moving the chaos to Kenosha, Wisconsin. Who knows which community is next?”

“Due to enhanced federal benefits, taxpayers are giving wages to jobless rioters that are destroying our communities,” Banks said. “We need to cut them off from their funding and make them feel the full financial consequences of their actions.”

A House Republican introduced a bill Friday that would make those charged with violence, looting or vandalism in connection with a protest ineligible for enhanced coronavirus unemployment benefits.

The “Support Peaceful Protest Act” would also make rioters “financially liable for the cost of federal policing,” according to the bill, which is sponsored by U.S. Rep. Jim Banks, R-Ind.

“If you’re convicted of a crime that caused more manpower and law enforcement officers to deal with it, then perhaps you should be on the hook to pay for that,” Banks told WIBC-FM in Indianapolis.

Banks said he introduced the bill the day after an older couple who are his constituents were harassed by protesters while leaving President Trump’s nomination acceptance speech at the White House on Thursday evening.

He said many rioters have time to participate in violence because they are unemployed people receiving government benefits — including increased federal benefits for those who have lost their jobs amid the pandemic.

“What we’re seeing happen in big cities and around the country are angry violent mobs showing up at federal properties, tearing down monuments on federal properties, especially in Washington, D.C. and it’s got to stop,” he said. “What my bill would do is add new consequences to those individuals who are breaking the law.”

Days after @SpeakerPelosi said members of the GOP on Capitol Hill are “enemies of the state,” a member of the Senate GOP attacked on the streets of DC. @SpeakerPelosi, will you condemn their actions and apologize for your dangerous rhetoric? https://t.co/t7ltAZLzbV

Hey @SpeakerPelosi, these are my constituents. They are good people.

If you told these mobs to stop, I have a feeling they would … https://t.co/l5qIT52XM4