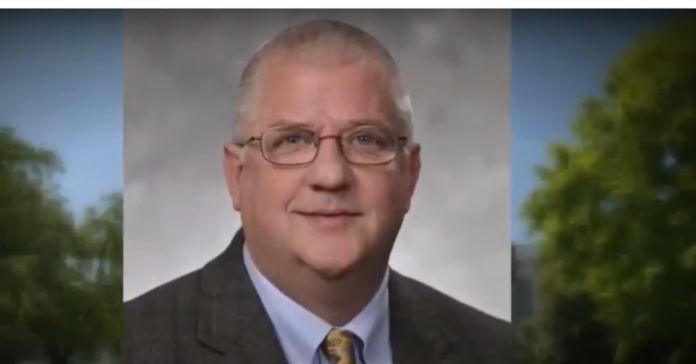 Republican State Rep. Mike Nearman just became the first person in history to be expelled from the Oregon Legislature. The vote was bipartisan and was 59-1. Only Nearman voted not to expel himself.

The Oregon House approved a resolution and officially found that Nearman’s act of opening a Capitol door so a crowd could enter the building on Dec. 21 was “disorderly behavior,” which is the constitutional standard required to eject a legislator.

“This is potentially the most serious and historic vote any of us will ever take in our career as legislators,” said state Rep. Julie Fahey, D-Eugene, said. No Republicans spoke on behalf of Nearman and all voted to expel. “You’re considering expelling a member, for the first time in history, because he thinks that people should have access to their Capitol, especially during session,” Nearman said.

“After this session, we’re all going to go out to dinner or stop at the grocery store, or maybe tomorrow we’ll shop and buy clothes or get our oil change, because all these places are open, but not this building,” he added.

Earlier in the day, a special committee created for the sole purpose of considering Nearman’s fate had approved the expulsion resolution unanimously. That 6-0 vote, evenly divided between Republicans and Democrats, sent a clear signal that the Polk County Republicans’ time in the House was coming to a close.

Rep. Andrea Salinas, D-Lake Oswego, said it was, “upsetting to learn that Rep. Nearman was planning and coordinating an attack on our Capitol… The trauma of that day will not leave with Rep. Nearman.”

Nearman had faced calls to resign for five months, ever since OPB reported he’d allowed far-right demonstrators, some armed, into the locked state Capitol building as lawmakers met in a special session on Dec. 21. Surveillance footage of his actions followed shortly after.

But the scope and strength of that pressure exploded late last week, when a video emerged of Nearman actively plotting the incursion with supporters days beforehand.

What had been a relatively plodding investigation, rapidly gained speed with House Speaker Tina Kotek on Monday introducing a resolution to expel Nearman and forming a special committee to consider it. The same day, all of Nearman’s House Republican colleagues — a group that had been mum on his actions for months — sent him a letter calling on him to resign.

“Given the newest evidence that has come to light regarding the events of December 21, 2020, it is our belief as friends and colleagues that it is in the best interests of your caucus, your family, yourself, and the state of Oregon for you to step down from office,” the letter said.

Individual Republicans have added to those comments in recent days. On Wednesday, state Rep. Bill Post, R-Keizer, penned an account of why he was urging Nearman to resign. Post concluded that Nearman had lied to him and other Republicans about what evidence existed about his intent on Dec. 21.

“About five weeks ago, as one of the closest colleagues he has in the Capitol, I asked ‘is there ANY further video or other evidence?’” Post wrote on his personal website. “He said ‘no.’ That is the crux of the problem: he lied. To me personally and to the Republican caucus.”

House Republican Leader Christine Drazan told OPB on Thursday, she had not believed Nearman intended to allow people into the Capitol until footage emerged June 4. She said she believes people might have been killed without the quick intervention of police.

And Rep. Daniel Bonham, R-The Dalles, said he’d concluded Nearman must be expelled, even though he believes Nearman is a smart lawmaker whose intentions were merely to open up the governing process to the public.

“I believe that’s what he wanted to do,” Bonham said, adding: “There was a great error in judgment that day… I saw the people outside. Nobody should opened a door to the people who were here that day.”

“The resolution passed by a vote of 59-1, with only Nearman voting against.” https://t.co/AYFMITiSXh

JUST IN: State Rep. Mike Nearman has become the first person ever expelled from the Oregon legislature, following revelations he helped plan an armed incursion in the state Capitol late last year. (@OPB)https://t.co/PQw804FHWC