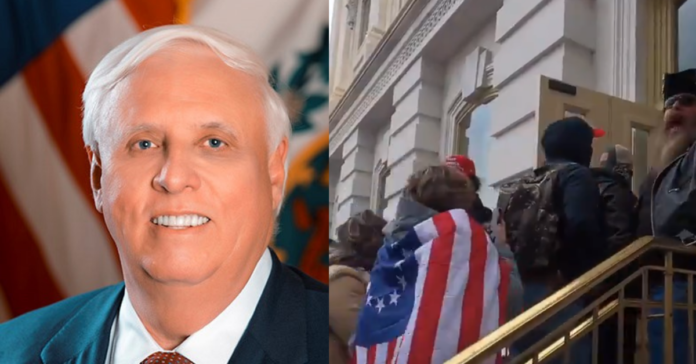 West Virginia Gov. Jim Justice (R) broke his silence with a wise and strong denunciation of the Capitol rioters.

He called them “despicable” saying it makes all Americans “look terrible beyond belief” before calling for everyone to step back and calm down.

“We have got to step back and take some deep breaths and realize that we’re Americans first and foremost,” Justice said Monday on CNBC.

“We aren’t Democrats and Republicans first and foremost. We’re Americans, and for crying out loud, this makes us look terrible beyond belief.”

“What happened with the attack on our Capitol, with people who were just out of control, is despicable,” he said.

“That’s all there is to it. There’s no other way around it.”

The governor called out the young man who blew up his life for nothing. Derrick Evans was just elected to his first political office and had to resign after he filmed himself in the Capitol and posted it on social media.

“To run up there and film yourself and go through that and everything, that’s nothing but a dumb bunny,” Justice said.

“I don’t know Delegate Evans. He’s newly elected and everything, but from my standpoint, if you’re going to do that stuff, really and truly you ought to suffer the consequences.”

Alabama Governor Kay Ivey also had some strong words for Congressman Mo Brooks who spoke before the riot:

“If the people of the 5th District believe their views are not properly represented, they need to express their disappointment directly to Rep. Brooks and, if necessary, hold him accountable at the ballot box. He does not speak for all Republicans — much less all Alabamians.”

After Rep. Mo Brooks urged "American patriots" to "start taking down names and kicking ass," Ala. Gov. Ivey says, "Everyone should be held accountable for the words they use. I’ve long believed that as elected officials, we should be held to a higher level of accountability…"