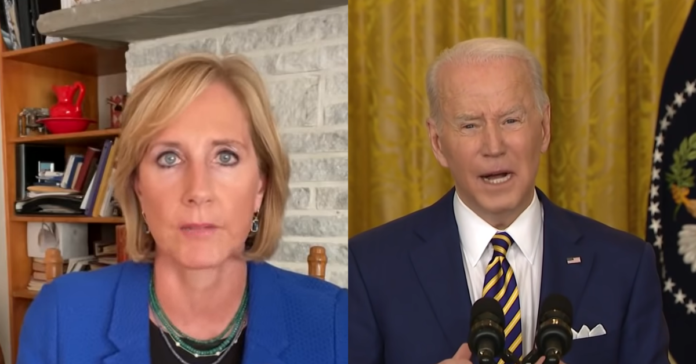 “His primary obligation as the commander-in-chief and president of the United States is to enforce our laws, to live up to his oath, to enforce our border security and to tell the truth to the American people.

Rep. Malliotakis said: “And you have it coming from the president of the United States. It is completely unacceptable. The Supreme Court ruled that he had to reinstate Remain in Mexico and he’s clearly not done that.

“In addition to that, you know that the drug cartels are making billions and billions of dollars every month with human trafficking, drug trafficking. We have the highest rate of fentanyl deaths in this country.

President Biden should resign or face removal by impeachment for this repeated and aggravated violation of his oath of office to protect the American homeland and its citizens. https://t.co/WRju67z7Pz

“Among 18 to 45-year-olds, it is the leading cause of death. Yet this president is on the side of the drug cartels and not the American people.

We have many pieces of legislation that will address this very issue but we need to take the House first,” she said.

A federal contractor can be heard telling a Westchester County police officer (in a conversation recorded on the officer’s body camera at the airport), “The government is betraying the American people.”

In the video of the August incident, Westchester Police Sgt. Michael Hamborsky is talking to federal contractors early in the morning about the after-hours flights and why local police were kept in the dark.

“You’re on a secure facility here; we really don’t know anything and we’re in charge of security,” he told one of the contractors.

“This is anti all our security stuff,” Hamborsky said.

“I’m just trying to figure out what’s what, who’s who and how I’m supposed to keep this secure,” Hamborsky said.

“We’re not allowed to have our picture taken when we get on base,” a contractor said.

Contractor: “Yes, and the United States Army. You’re on a federal installation but DHS wants everything on the down low.

“You don’t want to be in somewhere the spotlight is.

“You want to try and be as down low as possible. A lot of this is just down-low stuff that we don’t tell people because what we don’t want to do is attract attention.

“We don’t want the media. Like we don’t even know where we’re going when they tell us.

“And why? You know why?” Hamborsky said..

“You know why, look who’s in office. That’s why, come on,” the contractor said.

“You know why. Because if this gets out, the government is betraying the American people,” the contractor said.

Hey, President Biden, here is a Supreme Court pick that checks all the boxes. https://t.co/OkaRBoAOjk