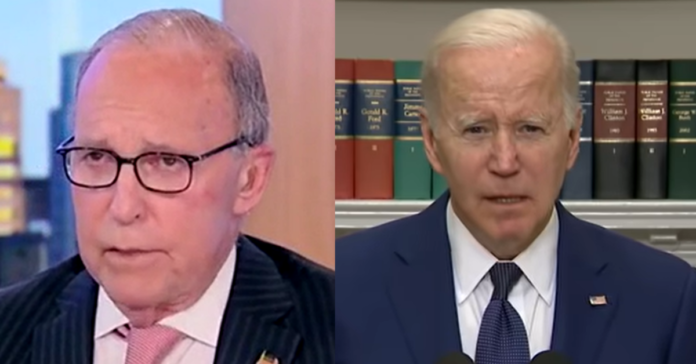 Former Trump adviser Larry Kudlow issued a warning to Democrats that their ‘wokeness is going to destroy the economy.’ After two years of total disaster under Biden, it is not hard to see where Kudlow is coming from.

Larry said: “Yeah, quiet part out loud. Defending essentially high gasoline prices. As you know, oil is at $120 a barrel today. I just want to tell you, any so-called transition to a green economy that ends fossil fuels would be an economic catastrophe.

“It would be a permanent recession. We couldn’t possibly do that or afford that. The job losses would be in the tens of millions. I am not exaggerating.

“A lot of first-rate economists have made the same point of view. So I’m leery of this transition.

“And in Biden’s piece today in The Wall Street Journal, he starts talking about more investment credits and more tax credits for green.

“That dream, that craziness, that wokeness is going to destroy our economy.

“If that’s what they mean by transition, and I think it is, then we’re in for it,” he said.

Biden finally went public with his ‘plan’ to combat inflation but most experts panned the plan as empty rhetoric.

“There’s no effort here, no discussion whatsoever to freeze federal spending, at least domestic spending, which is something they’ve got to do if they want to stop inflation.

“In fact, he talks about, you know, childcare allowances and elderly allowances.

“He wants more spending, which is going to make the problem worse.

“He takes pride in the deficit reduction.

“The deficit reduction this year is about running off the emergency programs, high-inflated revenues.

“And by the way, the Trump tax cuts have stimulated corporate tax revenues enormously. So that’s not going to work either,” he said.

VIDEO – @larry_kudlow Warns Democrats’ ‘Wokeness’ Will Destroy the Economy: ‘We’re in for It’https://t.co/xkP7cjQ4u5