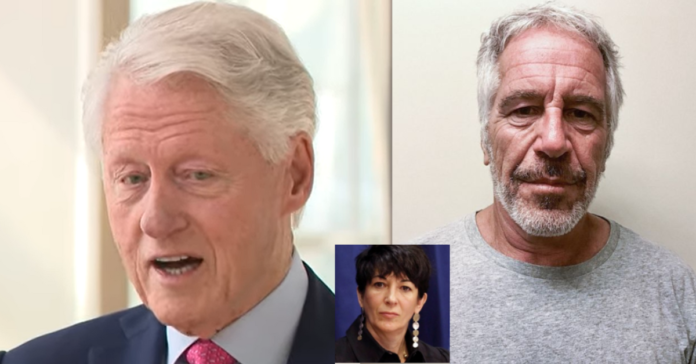 Ghislaine Maxwell is claiming to have helped “launch and develop” the Clinton Global Initiative in a new court filing. Jeffrey Epstein claimed for a long time that he too helped launch Bill and Hillary’s Global Initiative.

Her lawyers wrote in court:

Ms. Maxwell has always worked hard. Her many educational, occupational, and avocational accomplishments include becoming an Emergency Medical Technician (EMT), a helicopter pilot, a submersible pilot, a banker; partnering with the Cleveland Clinic to establish a telemedicine platform to enable people in remote areas to obtain quality medical treatment; helping develop the Clinton Global Initiative; and supporting a variety non-profit and charitable organizations.

In 2012, at age 50, she turned a lifelong passion for the oceans into a non-profit environmental organization, The TerraMar Project, with the mission of creating a “global ocean community” based on the idea of shared ownership and responsibility of the global “commons” (the high seas and international waters).

She spoke on topics related to ocean conservation, giving TED Talks, and delivering a speech at the United Nations. National Geographic and Oxford University were among the organizations that collaborated in support of the project. The TerraMar Project was closed after Epstein’s death to spare her partners from invasion of privacy by the press due their association with her.

Letters from Family and Friends

Accompanying letters from family and remaining friends (most having cut ties due to fear of association and the lure of “cancel culture”) attest to Ghislaine’s character; each offers a first-person narrative of some aspect of her life in sharp contrast to her characterization as a villain, rich heiress, and vapid socialite. See

Another psychotherapist and family friend of some 55 years, James Martin Hollomon,recalls his observations of Ghislaine’s father:

[T]heir father was narcissistic, demanding and highly controlling. He let them know early that he was going to leave his large fortune to charity. So, all the kids knew they had to “make it on their own” despite the wealth and privilege in which they were growing up. As I got to know each of these kids,  including Ghislaine, I noticed that early on, every single one worked very  hard at their jobs, as Bob wouldn’t bear any idleness, and each strove for their father’s and mother’s respect through their intelligence and their own hard work.

We were privileged, but we were not entitled and life was not always perfect.

Unfortunately, our family also became a grieving family. Our eldest brother Michael was gravely injured in a car accident just after Ghislaine was born; he remained in a coma until his death when Ghislaine was seven years old.

In spite of this tragedy, I watched Ghislaine learn to adapt and to become a productive  and caring human being.[B]oth of our parents had an incredible work ethic. We were all encouraged  from an early age to work to earn money and to respect the responsibility that came with that privilege. I have witnessed that work ethic in Ghislaine.

Ghislaine had money because she worked very hard to earn it. Her positions demanded hard, diligent work, great intelligence, great management skills,  great ability to get on well with people from all walks of life, artistic creativity, and caring about others.

Her work was a far cry from the ‘flippity-jibit socialite’ label that the media has decided to cast on her every time they reference her.

[F]rom a very early age each of us had to learn and demonstrate what our father termed “the 3 Cs: Consideration, Concentration and Conciseness” and to “always treat others as you would like to be treated yourself.”

We were quizzed on these principles constantly and had to regularly report examples of how we followed them. Ghislaine was no exception in deeply absorbing, exhibiting and living these values. For example, I think it is no small feat to train and become a helicopter pilot,  an Emergency Medical Technician (EMT),submersible pilot and more, as they all require dedication, concentration and quick thinking and reactions and no small amount of courage.

My sister was also very entrepreneurial in creating and investing in multiple  companies and organizations which created products and services, as well as employment. An important example is that in 2012, Ghislaine turned a lifelong passion for the oceans into a non-profit, The TerraMar Project, with the mission

to create a “global ocean community” based on the idea of shared ownership and responsibility of the global “commons”—the high seas or international waters.

Ghislaine Maxwell is not an heiress, villain, or vapid socialite. She has worked hard her entire life. She has energy, drive, commitment, a strong work ethic, and desire to do good in the world.

She has supported friends and family through tough times and personal crisis and currently is assisting women in her unit at the MDC. She has endeavored to contribute to society (e.g., by becoming an EMT, developing a platform so that people in remote areas could receive quality medical assistance, helping launch the Clinton Global Initiative, creating TerraMar, providing GED tutoring for inmates in her unit) and will continue to do so throughout her sentence and when she rejoins the community beyond prison walls.

She has also tried to protect the people around her (Ted Waitt’s children, her stepchildren, the people at TerraMar) from the onslaught of press and public vilification that come with having been associated with her.