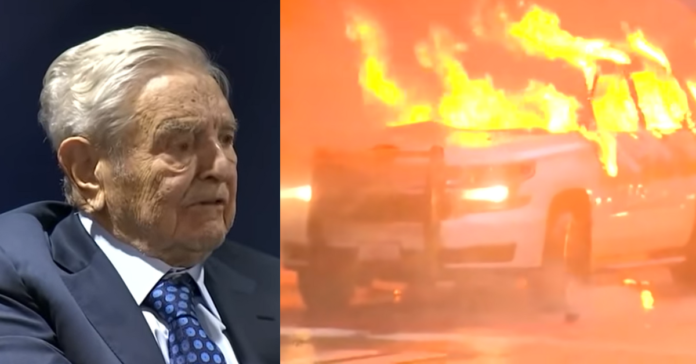 George Soros came clean from high up in his ivory tower, where he doesn’t have to deal with the mess he made, in the Wall Street Journal and defended funding the ‘reform prosecutors’ who are destroying our cities by letting violent criminals roam free.

He essentially told America to go pound sand saying, ‘I have no intention of stopping.” George wrote: “Like most of us, I’m concerned about crime. One of government’s most important roles is to ensure public safety.

I have been involved in efforts to reform the criminal-justice system for the more than 30 years I have been a philanthropist. Yet our system is rife with injustices that make us all less safe. The idea that we need to choose between justice and safety is false. They reinforce each other:

“If people trust the justice system, it will work. And if the system works, public safety will improve.

“In recent years, reform-minded prosecutors and other law-enforcement officials around the country have been coalescing around an agenda that promises to be more effective and just.

“This agenda includes prioritizing the resources of the criminal-justice system to protect people against violent crime.

“It urges that we treat drug addiction as a disease, not a crime. And it seeks to end the criminalization of poverty and mental illness.

“This agenda, aiming at both safety and justice, is based on both common sense and evidence. It’s popular. It’s effective.

“The goal is not defunding the police but restoring trust between the police and the policed, a partnership that fosters the solving of crimes.

“Some politicians and pundits have tried to blame recent spikes in crime on the policies of reform-minded prosecutors. The research I’ve seen says otherwise.

“The most rigorous academic study, analyzing data across 35 jurisdictions, shows no connection between the election of reform-minded prosecutors and local crime rates.

“In fact, violent crime in recent years has generally been increasing more quickly in jurisdictions without reform-minded prosecutors.

“Murder rates have been rising fastest in some Republican states led by tough-on-crime politicians.

“Serious scholars researching causes behind the recent increase in crime have pointed to other factors: a disturbing rise in mental illness among young people due to the isolation imposed by Covid lockdowns, a pullback in policing in the wake of public criminal-justice reform protests, and increases in gun trafficking.

“Many of the same people who call for more-punitive criminal-justice policies also support looser gun laws.

“This is why I have supported the election (and more recently the re-election) of prosecutors who support reform.

“I have done it transparently, and I have no intention of stopping. The funds I provide enable sensible reform-minded candidates to receive a hearing from the public. Judging by the results, the public likes what it’s hearing,” he wrote.

Pope, who is on supervised release from the Illinois Department of Juvenile Justice, was convicted of three carjacking cases as a juvenile last year, Kelly said. This year, Pope was convicted in juvenile court of carjacking, possessing a stolen motor vehicle, and aggravated fleeing, according to Kelly.

Woods is currently awaiting sentencing for an aggravated vehicular hijacking case in juvenile court. Kelly said Woods appeared in court for that case just six days before being arrested at Midway. He also has a juvenile adjudication for unlawful use of a weapon, Kelly said.

Judge Susana Ortiz set bail for Woods at $75,000 and for Pope at $50,000. They must post 10% of the bail amount to go home on electronic monitoring under Ortiz’s order.