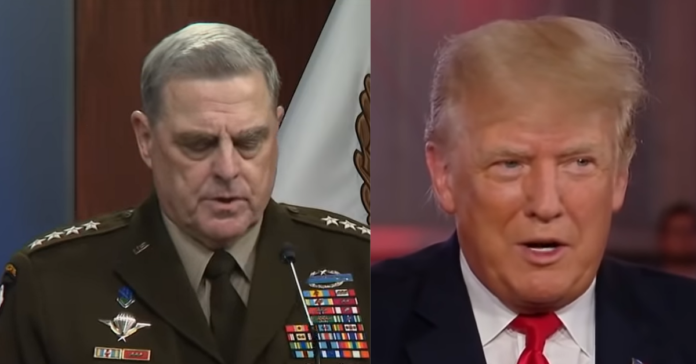 This comes from a new book, “Peril,” by Bob Woodward and Washington Post reporter Robert Costa. They write that Milley ‘was certain that Trump had gone into a serious mental decline in the aftermath of the election, with Trump now all but manic, screaming at officials and constructing his own alternate reality about endless election conspiracies.’

Milley worried that Trump could ‘go rogue,’ the authors contend.

“You never know what a president’s trigger point is,” Milley told his senior staff at one point.

In response, Milley took extraordinary action, and called a secret meeting in his Pentagon office on January 8 to review the process for military action, including launching nuclear weapons.

Speaking to senior military officials in charge of the National Military Command Center, the Pentagon’s war room, Milley instructed them not to take orders from anyone unless he was involved.

“No matter what you are told, you do the procedure. You do the process. And I’m part of that procedure,” Milley told the officers, according to the book. He then went around the room, looked each officer in the eye, and asked them to verbally confirm they understood.

“Got it?” Milley asked, according to the book.

‘Milley considered it an oath,’ the authors write.

“Peril” is based on more than 200 interviews with firsthand participants and witnesses, and it paints a chilling picture of Trump’s final days in office.

The book also says Milley took action after talking to House Speaker Nancy Pelosi who called Trump crazy according to a transcript the authors got of the call. From CNN:

After the call, Milley decided he had to act. He told his top service chiefs to watch everything “all the time.”

He called the director of the National Security Agency, Paul Nakasone, and told him, “Needles up … keep watching, scan.” And he told then-CIA Director Gina Haspel, “Aggressively watch everything, 360.”

The authors write, ‘Milley was overseeing the mobilization of America’s national security state without the knowledge of the American people or the rest of the world.’

Woodward and Costa also write that ‘some might contend that Milley had overstepped his authority and taken extraordinary power for himself,’ but he believed his actions were ‘a good faith precaution to ensure there was no historic rupture in the international order, no accidental war with China or others, and no use of nuclear weapons.’

NEW: CNN obtained an early copy of “Peril” from @realBobWoodward @costareports, which details how CJCS Gen. Milley took action in Jan. to limit Trump from launching nuclear weapons, telling officers not to take any action without consulting with him first https://t.co/LDZvBaeKyj

Milley was worried Trump would ‘go rogue’ after the Jan. 6 insurrection. “No matter what you are told, you do the procedure. You do the process. And I’m part of that procedure,” Milley told officers, per “Peril.” W/ @jamiegangel @elizabethstuart