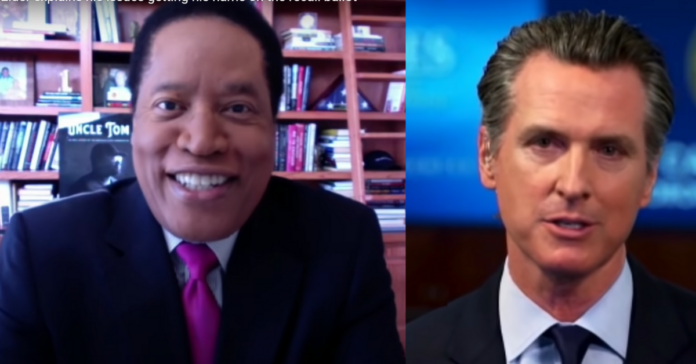 The judge said Elder’s application met state requirements overruling the state bureaucrats. Elder said Newsom and the Dems in the state were “scared to death” of his candidacy with good reason.

Elder appeals to a large section of the electorate and California seems poised to make big changes in the upcoming elections. “I believe that Larry Elder was targeted by Gavin Newsom in order to keep me off the ballot because I believe I’m the only one that he’s afraid of,” Elder said on Fox News.

“I know a lot of politicians say stuff like that, but in my case, it happens to be true.”

“Judge orders California to include Larry Elder on the ballot in California recall election.

“Says tax returns were never required in the first place for a recall as opposed to a primary election.

The judge ruled that Weber’s assertion that Elder was subject to a 2019 state law requiring candidates in a “direct primary election” to submit tax returns was inaccurate. The upcoming election is considered a special contest rather than a direct primary.

The California secretary of state’s office did not immediately return a request for comment on the judge’s decision.

A prominent radio host and syndicated columnist, Elder said he would take immediate steps to curtail escalating crime rates, promote school choice, address the rising cost of living and a homelessness crisis in the state.

On crime, Elder said he supports the repeal of Proposition 47, which lowered penalties for drug and theft-related offenses, and that he would urge police to return to what he described as “proactive” law enforcement techniques.

Victory! My next one will be on Sept. 14 at the ballot box. https://t.co/mnvU6s5Wid#RecallGavinNewsom #WeveGotAStateToSave pic.twitter.com/qI2X3IBSHw

California judge rules that the election law Elder allegedly violated DID NOT EVEN APPLY to a recall election AND even if it did, Elder "SUBSTANTIALLY COMPLIED." I will be on the ballot.