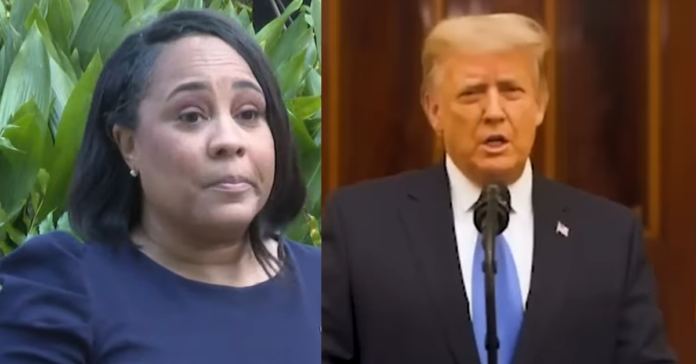 Fulton County District Attorney Fani Willis warned former President Donald Trump that he may be indicted soon for his efforts to overturn the 2020 election. Willis suggested at a hearing today that the special grand jury investigating Trump has recommended multiple indictments before adding that her decision on whether to bring charges is “imminent.”

The hearing was held in Atlanta to determine if she has to publicly release the special grand jury report. Willis said she does not want the report made public now because she is deciding whether to charge Trump and others.

“Decisions are imminent,” Willis told Judge Robert McBurney. “We want to make sure that everyone is treated fairly, and we think for future defendants to be treated fairly it’s not appropriate at this time to have this report released.”

Donald Wakeford, Fulton County’s chief senior assistant district attorney, told the judge it would be “dangerous” to release the report before any announcement on bringing charges is made.

He said: “We think immediately releasing before the district attorney has even had an opportunity to address publicly whether there will be charges or not – because there has not been a meaningful enough amount of time to assess it – is dangerous.

“It’s dangerous to the people who may or may not be named in the report for various reasons. It’s also a disservice to the witnesses who came to the grand jury and spoke the truth to the grand jury.”

But a coalition of media outlets wants the report released now.

“We believe the report should be released now and in its entirety. And that approach is consistent with the way the American judicial system operates,” attorney Tom Clyde, representing the coalition, said.

“In other words, it is not unusual for a district attorney or a prosecuting authority to be generally uncomfortable with having to release information during the progress of the case.

“That occurs all the time.”

At the close of the nearly two-hour hearing,

Judge McBurney said: “I think the fact that we had to discuss this for 90 minutes shows that it is somewhat extraordinary.

“There’ll be no rash decisions.

“No one’s going to wake up with the court having disclosed the report on the front page of a newspaper.”

“What you don’t want is an opportunity for a grand jury to make some allegation of criminal conduct that later on either can’t be proven or is unsubstantiated and the person hasn’t had a chance to clear his or her name.”

“The grand jury compelled the testimony of dozens of other, often high-ranking, officials during the investigation, but never found it important to speak with the President.

“Therefore, we can assume that the grand jury did their job and looked at the facts and the law, as we have, and concluded there were no violations of the law by President Trump.”

Robert James, who used a special grand jury when he was district attorney in Georgia’s DeKalb County, said:

“It’s important for people to know that the prosecutor’s office does not write the presentment, traditionally. It literally is the will of the people.

“The spotlight is hot.

“You can’t afford to lose a case like this, right?

“Now that Willis has the special grand jury’s report, it’s up to her to decide whether to go to a regular grand jury to pursue indictments.

“She’s not required to follow the exact recommendations laid out by the special grand jury, but its work product is likely to eventually become public and she could risk backlash if she runs too far afield of the panel’s suggestions.

“Willis has previously said she could pursue Racketeer Influenced and Corrupt Organizations (RICO) charges in this case, which would allow prosecutors to bring charges against multiple defendants and make the case that Trump and his allies were part of a criminal enterprise.”

Fulton County DA Fani Willis, "We are asking that the report not be released because you haven't seen that report. Decisions are imminent." pic.twitter.com/tsABRDlFyk