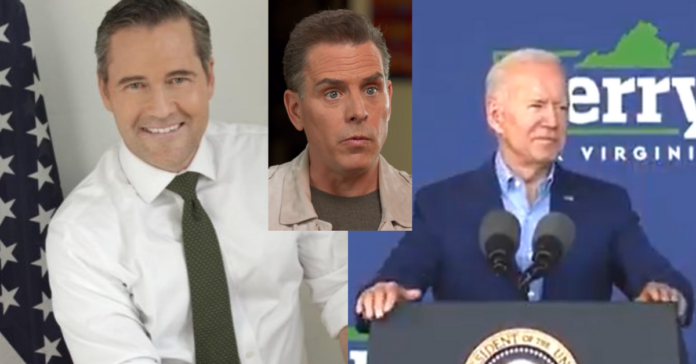 Rep. Michael Waltz, R-Fla., will make a move to hold Joe and Hunter Biden to account with a new bill to mandate the president and vice president disclose their non-dependent children’s finances as Hunter gets ready to rake in the cash with his art sales.

Waltz said the bill is “aimed at stopping the obvious and shameless grift that’s going on with Hunter Biden’s art sales, for which he is obviously not qualified to do and is only doing to continue to profit off of his family name.” He continued: “Look, this is just an obvious and despicable trend. I mean we can keep going down the list of egregious act after egregious act, and we have to put a stop to it.

“And I’m going to do my best to get it into legislation. The PAINTER Act, at this point, would expand it to the president’s grown children. And that’s really what this is all about, is just getting some transparency and shining a light on this. We should know who is backchanneling, backdooring and buying influence — which Hunter Biden has a long history of selling — to the President of the United States.

“Hunter’s ties to China pose a national security problem. I was in business, myself. I’ve had to raise money and fund a business.

“The fact that he flew on Air Force Two on official business and weeks later was given a billion dollars from the central bank of China – and then, months later, another half a billion – given his total lack of qualifications is a disturbing and obvious grift in and of itself.

“But, what I want to get to the bottom of is: At the direction of his Chinese business partners – which are still business partners right now as we speak – what type of technologies has Hunter been facilitating?

“Are these technologies that normally would have had export controls? Do they have dual uses for civilian and military uses?

“I can tell you again – I’m on the China task force – the Chinese aren’t looking to find investors like Hunter Biden to buy into shoestring factories.

“What this is about is putting some transparency in place.

“And it’s sad the Biden family won’t do it voluntarily, that we have to legislate this. So that’s what it’s getting after.

“Separately, I know people are going to point to the Trump family and children.

“I think there’s a distinction here in that if you have adult children with long, established careers both before office and then continuing into office. I have no problem with that.

“But when you’re seeing the brand-new venture, money-making venture, with zero qualifications that are clearly hanging solely on the family name with anonymous buyers, that is a completely different matter and that’s what really gives me pause,” Waltz said.

Rep. Michael Waltz told Fox News Tuesday his legislation, the Preventing Anonymous Income by Necessitating Transparency of Executive Relatives (PAINTER) Act, is a bid to stop “the obvious and shameless grift that’s going on with Hunter Biden’s art sales, for which he is obviously not qualified to do and is only doing to continue to profit off of his family name.”

The first son will present a solo exhibition of 15 paintings at galleries in New York and Los Angeles this fall. Prices for the art will range from $75,000 for works on paper to $500,000 for the larger canvases.

Critics have warned that would-be purchasers of Hunter’s art could spend big money not to purchase a masterpiece, but to curry favor with the West Wing.

“The initial reaction a lot of people are going to have is that he’s capitalizing on being the son of a president and wants people to give him a lot of money. I mean, those are awfully high prices.”