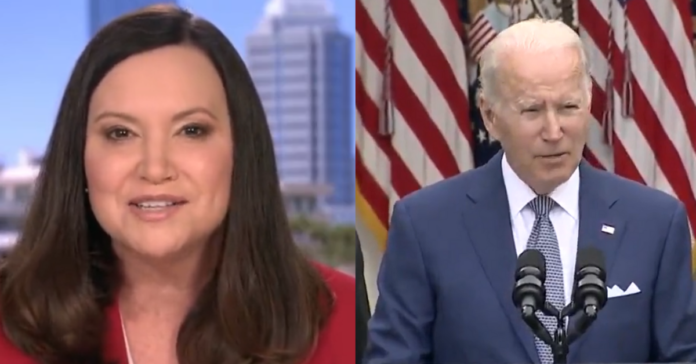 Florida Attorney General Ashley Moody went on Fox News to announce that her office has obtained documents she claims show Homeland Security chief Alejandro Mayorkas did not tell the truth when he testified to Congress about what DHS was doing at the border. She also accused President Joe Biden of being the leader of a cover-up.

Moody accused Biden of “unconscionable cover-up” of immigration mistakes saying the documents she obtained through FOIA show Joe understands his reckless policies are enriching cartels and failing the homeland.

Moody said: “Mayorkas testified under oath to Congress, and I showed last week that that was a lie when he said the policies were not affecting this historic illegal immigration into our country.

“And now we have uncovered through Florida’s litigation that not only does Biden understand that the transnational criminal organizations are facilitating, organizing and profiting millions from the illegal immigration into our country.

Since @JoeBiden and @SecMayorkas took office, it’s been a step-by-step breakdown of our immigration system.

We revealed the massive coverup to hide that they know their policies created the border crisis—jeopardizing public safety.@FoxNews pic.twitter.com/K1XYBhsjr0

“They also understand with the cancelation of Title 42, – and this is, in CBP’s words – ‘there will be significant safety implications’.

“Now you’ve brought in someone with a ‘spoonful of sugar to help the medicine go down’ on the American public,” she said.

More than 20 states have joined the lawsuit seeking to block the Biden administration from ending Title 42 later this month, arguing that the Centers for Disease Control and Prevention did not go about terminating the public health order properly.

Title 42 was put in place by the CDC in March of 2020 to stop the spread of COVID-19. That unprecedented move allows immigration authorities to quickly expel migrants at the southern border to Mexico or their home countries, without giving them a chance to seek asylum under U.S. law.

With COVID vaccines now widely available, the CDC says Title 42 is no longer necessary to protect public health and has ordered the policy to end on May 23. But more than 20 states have joined a lawsuit seeking to block that from happening.

The Department of Homeland Security says it has a plan in place to deal with a possible influx at the border when Title 42 is lifted — though Congressional Republicans, and some Democrats, remain skeptical.

Judge Summerhays has already signed a temporary restraining order preventing the Biden administration from beginning to wind down the policy before May 23rd. In a status conference last month, Summerhays signaled that he is likely to side with the states on their claim that the CDC did not act properly when it moved to terminate Title 42.

It should be no surprise that the Biden administration has seen the results of their disastrous actions and are trying to cover it up with a disinformation board—led by “Mary Poppins” and her “spoon full of sugar” to obfuscate their dangerous dereliction of duty. pic.twitter.com/xjfW5nBubm