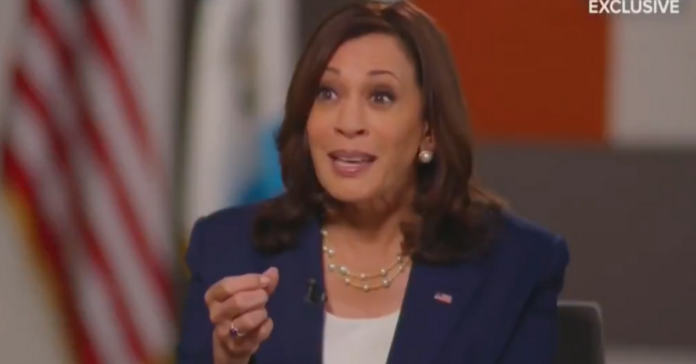 Vice President Kamala Harris just got hit with her first big leak and it is coming from inside the White House after Harris did the impossible and flubbed a friendly interview complete with the softest of softball questions. She is not ready for prime time.

CNN’s Jeremy Diamond reports that White House insiders were ‘perplexed’ and ‘not thrilled’ and ‘confused’ with her answers and that her own team was reportedly frustrated she botched the interview in the manner in which she did. “The Vice President saw this trip as an opportunity to burnish her foreign policy credentials after entering office with very little foreign policy experience,” Diamond said. “She also hoped to make real progress on the root causes on migration from Central America.”

“There was certainly progress, but there are now concerns that some of that progress may have been overshadowed by her answers to some of these questions that her team knew that she would be facing,” he said.

“It’s left some of the administration officials perplexed, and the vice president’s team frustrated,” he added.

“Some administration officials are quietly perplexed about the Vice President’s answers to some questions, in particular the particular question she got from Lester Holt where she equated the question about the border with Europe,” he said.

“There was hope the trip would be a success, and in the end, they feel it may have been overshadowed by some of her answers to these questions,” Diamond said.

Sen. Ted Cruz mocked Harris (to her face unlike WH officials) saying “It seemed like a hostage video she was just reading the words. We’ve seen in the 5 months they’ve been in office an absolute disaster unfolding at the border. In that entire interview what you don’t hear is any willingness to fix the problem. They can fix the problem tomorrow, and they can fix the problem by ending ‘catch and release’ and by reinstating the ‘Remain in Mexico’ policy.

“Do you have any plans to visit the border?” Holt asked and no one could have exopected what would come next.

Holt called her right out saying, “You haven’t been to the border.”

CNN: The White House is “confused” by Kamala Harris’ trouble with a "question that the administration has been dealing with for months” pic.twitter.com/qUywWyiPrB