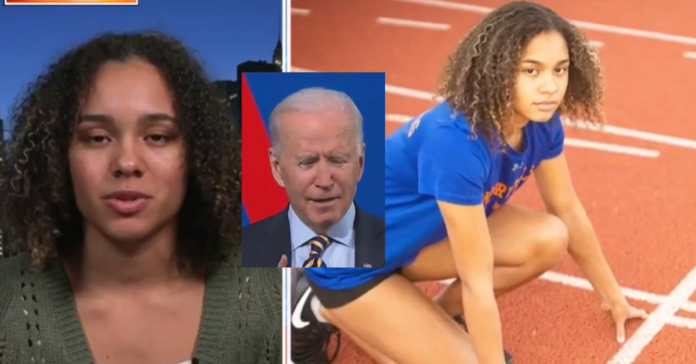 A Connecticut high school track athlete is not happy with President Joe Biden’s Justice Department after they withdrew from a lawsuit to stop transgender athletes from competing in girls’ high school sports.

“It’s not really about placement, it’s all about knowing that I work so many hours a week to be able to get runner up at New Englands as a freshman.”

“People should realize that a lot of biological females have missed out on making it to meets that really matter like states and regionals and the transgender athletes have taken spots on the podium that belong to biological females,” Smith said.

“We train for so many days a week, so many hours to be able to be the best in our state and the best in our region, and these biological males are just taking it away from us and we really deserve it.”

Smith said the girls have worked hard to get their stories out so people can “realize that fairness needs to be restored in our sport and all women’s sports.”

“I ran against the biological males at the New England meet because in the 200 meter I took third place when I should have gotten runner up.”

Smith’s attorney, Christiana Holcomb said, “Even now, the Biden administration is pushing for the so-called Equality Act, which ignores the physical differences between men and women and threatens women’s privacy, women’s homeless shelters, and yes, even women’s sports on a national level for female athletes like Alanna.”

“Title IX was designed to ensure that girls like Alanna have a fair and level playing field,” Holcomb said, “We want to move forward and we want to see women’s sports protected across the country.”

The withdrawal comes after Biden he signed an executive order on his first day in office prohibiting discrimination based on gender identity in school sports and elsewhere.

Connecticut is one of 17 states that allows high school athletes to compete in sports according to their gender identity without regulation.

Biden’s Justice Department has ‘reconsidered the matter,’ U.S. Attorney for the District of Connecticut John Durham wrote in a filing on Tuesday ahead of a Friday hearing on a motion to dismiss the lawsuit.

The Education Department’s Office for Civil Rights, which sent letters last year threatening to cut federal funding from Connecticut school districts, has also withdrawn its support for the lawsuit.

The girls, who lost state titles to transgender athletes in 2018, claimed they were forced to compete against two transgender sprinters.

The lawsuit followed a Title IX complaint filed in June 2018 by the girls’ families and the Alliance Defending Freedom with the Education Department’s Office for Civil Rights.