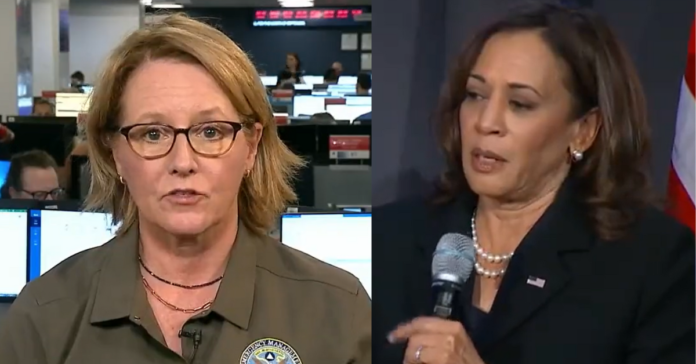 FEMA issued an embarrassing correction to America’s Vice President after Kamala Harris put her foot in her mouth again. Harris faced backlash for comments where she seemed to suggest the feds were going to have different rules for Hurricane aid relief saying efforts should focus on “giving resources based on equity” to “communities of color.”

Harris misspoke and was trying to make a larger point about access but to get publicly rebuked by a bureaucrat should still sting. “We’re going to support all communities,” Federal Emergency Management Agency (FEMA) Administrator Deanne Criswell said on “Face the Nation” in response to Harris.

“One of the things that I have known, and I have experienced, responding to other disasters is that there are people that often have a hard time accessing our programs, there are barriers to our program,” she added.

“One of our focus areas, since I’ve been in office, is to make sure that we’re removing those barriers.”

“It is our lowest income communities and our communities of color that are most impacted by these extreme conditions…I know we are all thinking about the families in Florida and Puerto Rico with Fiona and what we need to do to help them in terms of an immediate response and aid.

“We have to address this in a way that is about giving resources based on equity, understanding that we fight for equality, but we also need to fight for equity.

“Understanding not everyone starts out at the same place, and if we want people to be in an equal place, sometimes we have to take into account those disparities.

“VP’s rhetoric is causing undue panic and must be clarified.

“FEMA Individual Assistance is already available to all Floridians impacted by Hurricane Ian, regardless of race or background.

“The @VP needs to correct what she said as well.

While responding to VP Harris’s comments about equity and equality with disaster relief, FEMA head Deanne Criswell acknowledges there are people who have a “hard time” and encounter “barriers” accessing aid, but “our programs support everybody.” pic.twitter.com/pfCW9mn3x4

“A real journalist would simply ask her to clarify what she meant by those comments and why she misrepresented the relief effort.”

“Should be according to greatest need, not race or anything else.”

Bill Maher had this to say about our failing VP:

“What I could see is replacing the Vice President. Because she’s just not very popular anywhere.

“And it didn’t seem to work out.

“And, I don’t know, that’s been done before on a ticket.

“I think she’s a very bright person, but I don’t know- I can see them doing that because a lot of the problem with ‘Biden being old’ is- oh, if he dies, then you’re going to get this person.”

You can’t make this up.

Kamala Harris said the administration will be giving hurricane resources “based on equity” by directing funds to “communities of color.”

I guess everyone else is just screwed. 🤦🏻‍♂️ pic.twitter.com/75y4JfoYD7