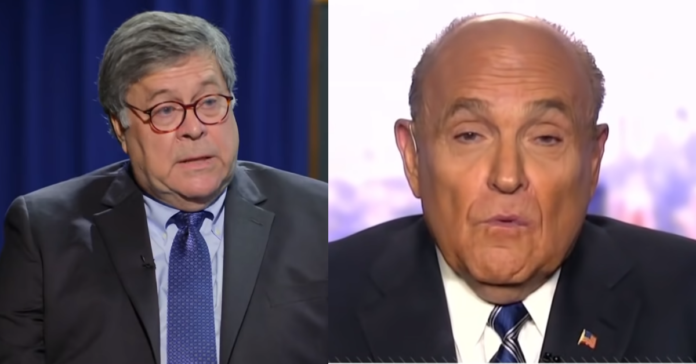 Federal prosecutors for the SDNY are actively trying to seize Rudy Giuliani’s electronic communications according to a new bombshell report from NBC News.

Outgoing Attorney General William Barr will have to approve the move before it happens and so far reports are that he is refusing. Barr’s last day is tomorrow.

In October of 2019 we learned there was a federal investigation into Rudy Giuliani’s business dealings in Ukraine specifically with Lev Parnas and Igor Fruman.

Federal prosecutors have discussed making a legal request for Rudy Giuliani’s electronic communications, two sources familiar with the probe tell NBC News, a sign that the investigation into President Donald Trump’s personal attorney remains active and may soon be ramping up.

Prosecutors for the Southern District of New York have been in communication with Justice Department officials in Washington about gaining access to Giuliani’s emails, the two sources said.

The Southern District needs Washington’s approval before its prosecutors can ask a judge to sign a search warrant for materials that may be protected by attorney-client privilege, according to department policy. It is not known whether Washington has been granted that approval.

The scope of the current investigation is unclear, but in October 2019, The Wall Street Journal reported that prosecutors from the Southern District were reviewing Giuliani’s bank records as part of an investigation into his dealings in Ukraine.

Two of his former associates, Lev Parnas and Igor Fruman, were arrested that month on charges of campaign finance fraud and have since been charged with additional crimes related to wire fraud conspiracy. Parnas and Fruman have pleaded not guilty.

In February, The Washington Post reported that prosecutors were contacting witnesses and seeking to collect additional documents as part of their investigation into Giuliani.

Since then, little had been known about the status of the investigation and whether Giuliani was still under scrutiny for his efforts to convince Ukraine to investigate then-candidate Joe Biden over his son Hunter’s business dealings in the country.

The two sources familiar, however, say the investigation into Giuliani is ongoing, with one saying it is “very active.”