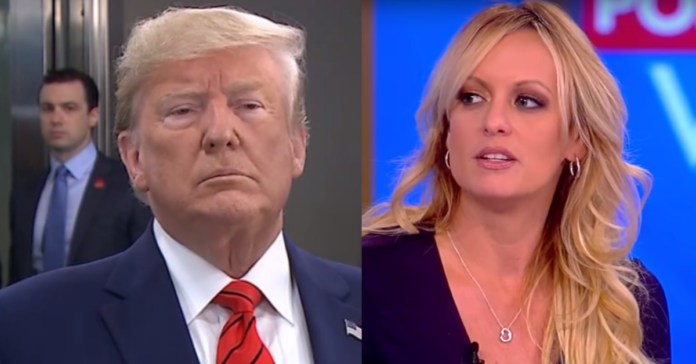 A federal appeals court has rejected a libel lawsuit against President Trump by adult film star Stormy Daniels over a tweet Trump posted in 2018. The court ruling said:

“Viewed through the eyes of an objectively reasonable reader, the tweet here reflects Mr. Trump’s opinion about the implications of the allegedly similar appearances of Ms. Clifford’s ex-husband and the man in the sketch.:

“Because the tweet juxtaposing the two images was displayed immediately below Mr. Trump’s tweet, the reader was provided with the information underlying the allegedly defamatory statement and was free to draw his or her own conclusions.”

The ruling by the 9th U.S. Circuit Court of Appeals upholds a previous 2018 ruling tossing the suit on the grounds that Trump’s comments amounted to an opinion protected by the First Amendment.

Daniels, who claims she had an affair with Trump — which he denies — had said she was approached in 2011 by a man who threatened her to keep quiet about the alleged relationship.

The case stems from Trump’s tweeted response to the alleged threat.

Trump retweeted side-by-side pictures of Stormy’s ex-husband and the sketch released by her then-lawyer Michael Avenatti of the alleged threatener — noting both looked like the same man.

“A sketch about a nonexistent man,” Trump tweeted.

“A total con job playing the Fake News Media for Fools (but they know it)!”

During the 2016 campaign, Michael Cohen, Trump’s now-disgraced former personal attorney, at the time allegedly arranged to pay Daniels $130,000 to insist that she did not have sex with the now-president.

The tweet issued by Trump commented on a user’s post comparing a sketch that Daniels helped create of her alleged intimidator to a picture of her husband.

Trump tweeted on April 18, 2018: “A sketch years later about a nonexistent man. A total con job, playing the Fake News Media for Fools (but they know it)!.”