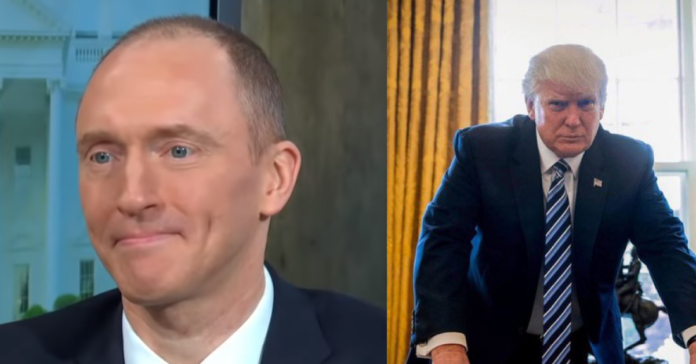 Kevin Clinesmith admitted to altering an email that was then used to get a government wiretap of former Trump campaign adviser Carter Page and just learned his fate from the judge. Clinesmith was charged and while he was the only one charged during Durham’s investigation it is important to not forget the significance of what he did.

“I first collaborated with the CIA while in the military. I never betrayed that trust. My life “spun out of control” due to the false allegations. I had no privacy – everything was monitored by the gov’t/ They physically searched my belongings and hotel room,” Page said at Clinesmith’s sentencing today.

Clinesmith altered an email and Carter Page was hit with a FISA warrant. But what happened after is where the real problem lies. “The national media accused me of being an agent of a foreign power I’ve been harassed in person. I know what it’s like for your life to be destroyed,” Page told the judge at Clinesmith’s sentencing today.

When the Russia story was fading and America was turning the channel they leaked the news of the Carter Page FISA renewal. Immediately as if it was planned, all the ex-FBI and ex-NSA guys got to go on television and say to get a FISA warrant is hard but to get a renewal is impossible and that means there is an ongoing crime and moreover to get the renewal they have to show proof of the crime and that it is still going on.

That gave the Russia Trump story new legs and even now people still doubt what was in the Mueller report because the ‘Page FISA renewal proved a crime’ is not an easy narrative to break free from. Especiallu when it is seared into your brain 24/7 for months.

A former FBI lawyer who pleaded guilty to falsifying a document during the agency’s investigation of contacts between former President Donald Trump’s 2016 campaign and Russia is due to be sentenced on Friday, with a special counsel appointed under Trump asking a judge to have him serve prison time.

Kevin Clinesmith, who admitted to altering an email used to justify a government wiretap of former Trump campaign adviser Carter Page, is set to be sentenced by U.S. District Judge James Boasberg.

Special counsel John Durham recommended up to six months in prison, suggesting Clinesmith acted out of “political or personal bias” against Trump. Defense lawyers asked to judge to spare Clinesmith of prison time, noting that he and his wife are expecting their first child in March.

Mueller’s report on his investigation said it “did not establish that Page coordinated with the Russian government” in its election interference aimed at boosting Trump’s candidacy, but said Page’s activities “were not fully explained.”

Bill Barr, appointed by Trump as attorney general, tapped Durham in 2019 to investigate the U.S. officials who probed the Trump-Russia contacts.

Barr last month disclosed he had made Durham a special counsel in October, a position that would make it more difficult for new President Joe Biden’s administration to remove him.

Disgraced FBI lawyer Kevin Clinesmith has been sentenced to PROBATION.

Alter a CIA email, lie to your FBI supervisor, cause the FBI/DOJ to lie to the FISA Court: PROBATION!

Message of today: we live in a clown world.🤡

Jonathan Turley Demands Liberals Leave Kyle Rittenhouse’s Education Alone: “His education should not be treated as a vehicle for collective extrajudicial punishment”

Kyle Rittenhouse Puts Joe Biden On Notice: “It’s actual malice, defaming my character for him to say something like that”