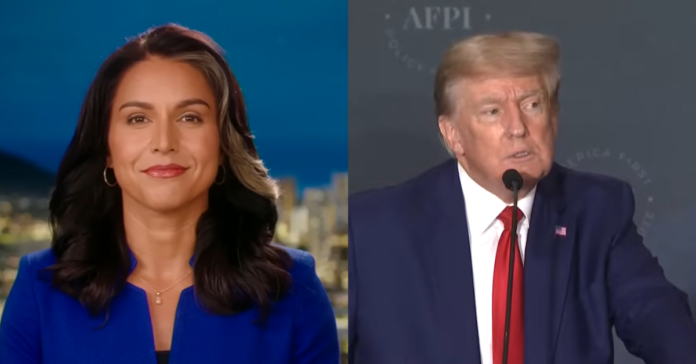 Former Dem Rep and Dem presidential candidate Tulsi Gabbard sounded the alarm over the Federal Bureau of Investigation’s (FBI) raid of former President Donald Trump’s home at Mar-a-Lago. Appearing on Fox News Channel’s Jesse Watters Primetime she said all Americans need to be worried about this.

Jesse Watters said: I’m just angry. I’m sad and I’m angry, and I feel like we’re losing the country. How do you feel?”

Gabbard said: “We are. This is something that every American should be extremely concerned about because this raid is just the latest serious escalation of this disturbing trend that we’ve seen of blatant abuse of power by those in power to not only protect their friends, target their political opponents or frankly anyone who dares to dissent or challenge or disagree or question what this administration is doing.”

FBI Director Chris Wray, a Trump appointee, would not comment on the investigation but did denounce threats of violence that have no place in our society.

FBI Director Chris Wray condemned the violent rhetoric made against law enforcement on Wednesday after his agency’s search of former President Donald Trump’s Mar-a-Lago residence, according to NBC News.

“I’m always concerned about threats to law enforcement,” Wray said following a news conference at the FBI field office in Omaha, Nebraska. “Violence against law enforcement is not the answer, no matter who you’re upset with.

Wray said in the last few years, “we’ve had an alarming rise in violence against law enforcement.” He called the threats against the FBI “deplorable and dangerous.”

Wray, who Trump appointed to become the agency director in 2017, declined to provide more details about the FBI search at Mar-a-Lago.

According to Newsweek, Trump may have a mole on his team:

The raid on Mar-a-Lago was based largely on information from an FBI confidential human source, one who was able to identify what classified documents former President Trump was still hiding and even the location of those documents, two senior government officials told Newsweek.

The officials, who have direct knowledge of the FBI’s deliberations and were granted anonymity in order to discuss sensitive matters, said the raid of Donald Trump’s Florida residence was deliberately timed to occur when the former president was away.

FBI decision-makers in Washington and Miami thought that denying the former president a photo opportunity or a platform from which to grandstand (or to attempt to thwart the raid) would lower the profile of the event, says one of the sources, a senior Justice Department official who is a 30-year veteran of the FBI.