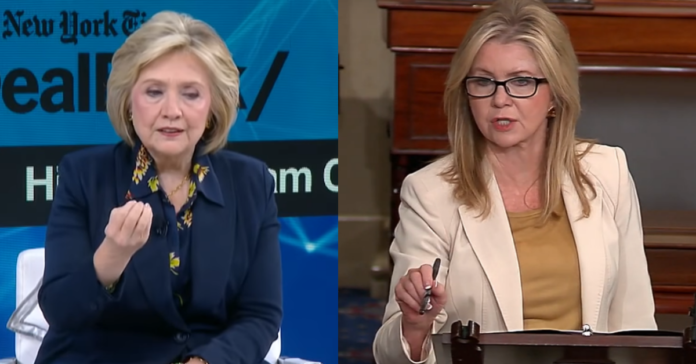 A former staffer for twice-failed presidential candidate Hillary Clinton crossed the line with an insult he hurled at Tennessee Senator Marsha Blackburn.

The guy got personal. Then he got nasty. And there is no doubt if he was not attacking a GOP Senator with his racially charged venom the left would cancel him in a minute.

And they will when they run out of other victims.

From The Western Journal: So much for the idea of the tolerant left. A tweet from a former Clinton staffer directed at Tennessee Republican Sen. Marsha Blackburn proves that some on the left are anything but.

Adam Parkhomenko, who co-founded the Ready for Hillary PAC, had some harsh words for Blackburn after she dared to express a divergent view on Black Lives Matter. In addition to calling her an “inbred racist trash,” he also asked the senator to “please f— off…

…Blackburn correctly pointed out that “Black Lives Matter is a 501(c)(3) organization run by ‘trained Marxists’” before warning that “we cannot allow our great country to be destroyed under the pretense of social justice.”

Blackburn clearly knows more about Black Lives Matter than Parkhomenko. Back in 2015, Patrisse Cullors, one of the co-founders of the movement, described herself and another member of the movement as “trained Marxists.”

Of course, it should not come as a surprise that Parkhomenko, who worked for a person who coined the phrase “basket of deplorables,” would offer such commentary.

You are inbred racist trash. Please fuck off

Can we make a mask that looks like trump’s ass? I know it’s gross, but it may be the only way we can get Ted Cruz to wear one.