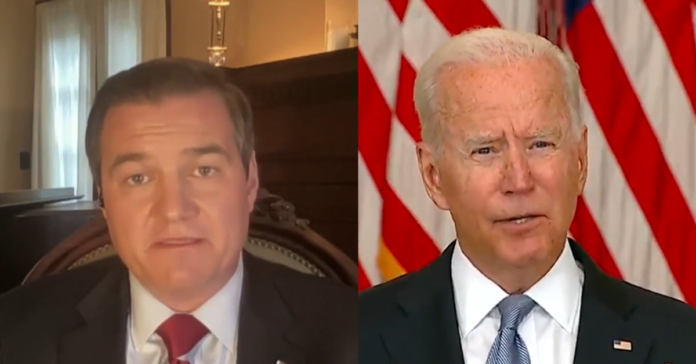 Former CIA analyst Matt Zeller went on MSNBC and called BS on Biden’s big speech that the media all fawned over. He said Biden lied to the American people during his speech on the debacle in Kabul.

Zeller said, “I feel like I watched a different speech than the rest of you guys. I was appalled. There was such a profound bald-faced lie in that speech, the idea we planned for every contingency?

“I have been personally trying to tell this administration since it took office. I have been trying to tell our government for years this was coming. We sent them plan after plan on how to evacuate these people. Nobody listened to us. They didn’t plan for the evacuation of our Afghan war-time allies. They’re trying to conduct it now at the 11th hour.

“I have Afghans on the ground right now who are telling me the Taliban going door to door in Kabul and making lists of people who used to work with us. They’re telling them with smiles on their face, evil smiles. They will be back for them once we leave.

“So we either take them now, or these people are going to die. I have been trying to tell anyone who will listen that this is a never-again moment in the making.

“This is an administration that seems to be a profound champion and defender of human rights. Well, sometimes, human rights have to be defended at the barrel end of a gun. The Taliban are a modern version of the Nazis.

“We did not plan as a government for this contingency. The American people, the advocates who have been pleading with the government, did plan for it.

“You can go to our website, evacuateourallies.org. We have had a plan. We have receipts. I put them on social media. No one got back with us.

“These people went on to the next unit and the next mission time and time and time again, and how dare us to even contemplate leaving them behind to, again, what I consider to be a modern equivalent of the Nazi Party.”

Former CIA Analyst Matt Zeller: “I was appalled” by Joe Biden’s speech, it was a “lie” pic.twitter.com/MFLioraIxW

Zeller: “I feel like I watched a different speech than the rest of you guys. I was appalled.” pic.twitter.com/eGC5tMBvy4

"We have the largest military on the planet, let’s use it for one good purpose, to get these people out. We have a beach head in Kabul. We need to keep it open for as long as we can and put as many people onto as many planes as we possibly can." – Matt Zeller @mattczeller pic.twitter.com/aTLexZuOIw