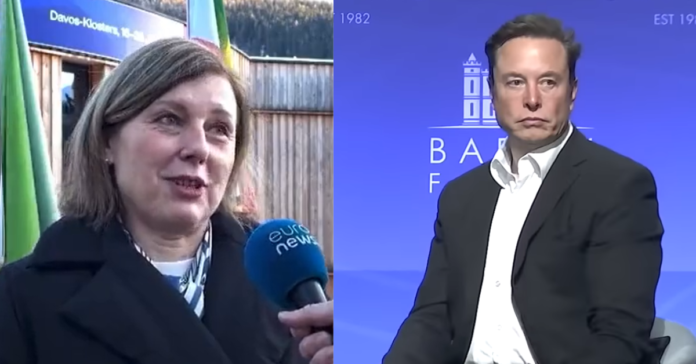 European Commission’s Vice-President for Values and Transparency Věra Jourová issued a warning to Elon Musk telling the Twitter CEO that ‘the time of the wild west is over” and that if he fails to comply with the EU’s rules he will face sanctions.

“But at the same time, we cannot accept, for instance, illegal content online and so on. So, our message was clear: we have rules which have to be complied with, otherwise, there will be sanctions.

“I’ve worked with the platforms, with the ‘big boys’ – and girls sometimes – already for several years.

“And for me, the legislation was never the only option.

“How to push them to do things?

At the WEF annual meeting, the EU regulator threatens Twitter and Elon Musk with sanctions.

She is very unhappy about unapproved thoughts being expressed freely on Twitter.

Your thoughts are too dangerous for the EU bureaucrats to handle! pic.twitter.com/M27cykXqtF

“We had some ‘gentlemen’s agreements,’ like the Code of Conduct against Hate Speech, which was very important in 2016 when we saw an extreme rise of hatred online targeted to concrete people or groups of citizens.

“So, I always like to combine decent communication and discussion, and testing how far they can go under the framework of some sort of social responsibility.

“One day, he wakes up and he dislikes some of the accounts so he removes them,” she said.

“I have not spoken to him. Of course, we are watching and listening.

“I think that the confidence has been weakened. And I had a quite high level of confidence when it comes to Twitter.

“I have to say that we worked with knowledgeable people – with the lawyers, with sociologists – who understood that they have to behave in some decent way not to cause really big harm to the society.

“I always felt that this notion of responsibility was there. So, this is what I don’t feel from Elon Musk personally.

"Illegal hate speech, which you will have soon also in the U.S. I think that we have a strong reason why we have this in the criminal law." pic.twitter.com/iLR1MePTYT