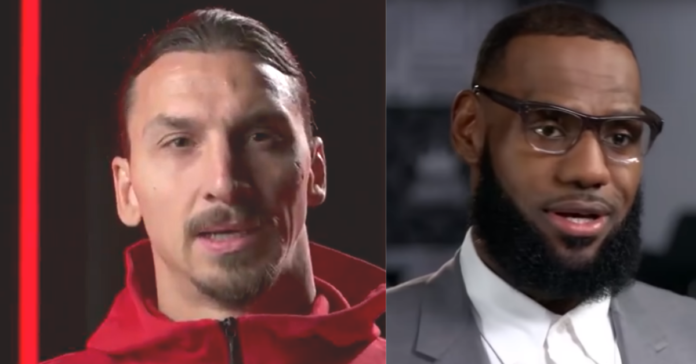 European soccer star Zlatan Ibrahimovic ripped LeBron James and others in the sports world who get involved with politics. “LeBron is phenomenal at what he’s doing, but I don’t like when people have some kind of status, they go and do politics at the same time,” Ibrahimovic said.

“Do what you’re good at. Do the category you do. I play football because I’m the best at playing football. I don’t do politics. If I would be a political politician, I would do politics,” he added. (See video below)

“That is the first mistake people do when they become famous and they become in a certain status. Stay out of it. Just do what you do best because it doesn’t look good.”

“I still know what I do on the floor, and obviously, I give everything to the game,” James said in December.

“But I can make a greater impact off the floor right now, more than I can on the floor. And I want to continue to inspire people with the way I play the game of basketball.”

“But there are so many more things that I can do off the floor to help cultivate people, inspire people, bring people together, empower them.”

James’ More Than a Vote organization drew more than 42,000 volunteers to work at polling stations for the November election, helped some earn back their voting rights and pushed for turnout among Black and young voters.

“The tragic death of George Floyd, everyone getting a chance to see that, and also hearing the story of Breonna Taylor, her tragic story, and Ahmaud Arbery in Georgia … my people have had enough and I have had enough,” James said. “That’s why I called for action, and with my platform, I believed I could get people to join me.”

He also focused, as always, on his hometown of Akron, Ohio.

The I PROMISE School he opened in 2018 now has over 450 students in third through sixth grades. When the pandemic shut down the school, James and his team ensured students got hot meals delivered to their homes — even complete Thanksgiving meals. An affordable housing project for 50 families broke ground this year.

And this month, plans for House Three Thirty (a nod to Akron’s area code) were announced, detailing how James is going to offer things like accessible family financial health programming, job training and a community gathering space.

“The pandemic has been rough on all of us,” James said. “No matter your situation, no matter where you are in life, it’s been rough. And the first thing I thought about, besides the stoppage of the season, when the pandemic hit was, ‘What am I going to do for my kids back in my [hometown] in my school?'”

Zlatan Ibrahimovic says famous people like athletes should stay out of politics.

Zlatan Ibrahimovic Says LeBron Should Stay Out Of Politics, 'Do What You're Good At' https://t.co/hrM3BTUy5p