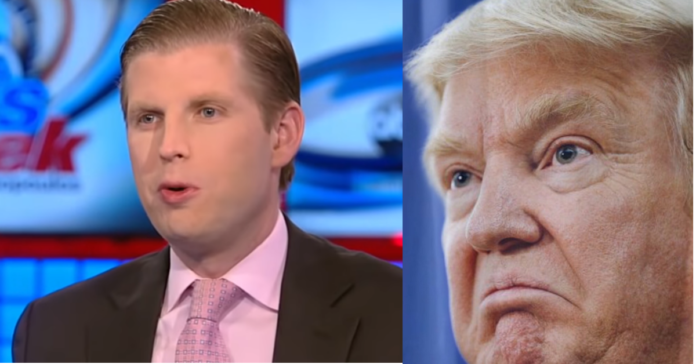 The left has lost its collective mind over President Trump. The pure hatred is something we have never seen.

But the misguided hatred is what is really sad, most of the goons on the left either did not vote or do not pay attention to what is really going on.

You can ask these clowns any number of questions about politics and they will be hardpressed to get one answer right.

But it feels good to spit on a Trump I guess, that is until the Secret Service grabs you and cuffs and stuff you.

President Donald Trump’s son Eric says he was spit on by an employee at the Aviary, a cocktail bar in Chicago, on Tuesday night. The employee was taken into Secret Service custody but was later released.

“It was purely a disgusting act by somebody who clearly has emotional problems,” Trump told Breitbart News. “For a party that preaches tolerance, this once again demonstrates they have very little civility. When somebody is sick enough to resort to spitting on someone, it just emphasizes a sickness and desperation and the fact that we’re winning.”

The Chicago Police Department was on the scene and assisted the United States Secret Service with a “law enforcement matter,” CPD Chief Communications Officer Anthony Guglielmi said on Twitter.

A source on the scene told Breitbart News that the Chicago Police Department and Secret Service officials handled the case “extraordinarily professionally.”

According to sources familiar with the matter, Eric Trump had, with a group of people, come into Aviary, an upscale lounge in Chicago, and the young woman–an employee of the establishment–came right up to him and spit in his face. Per an eyewitness, she murmured inaudibly something that sounded like it was anti-Trump. Then Secret Service agents who were there protecting Eric Trump jumped into action and took the woman into custody. She was put in handcuffs and placed in a police paddy wagon, a source with knowledge said. Eric Trump decided not to press charges against the woman in the end, and she was released from police custody.

Hearing of incident at Aviary tonight, an employee allegedly spit on son of @realDonaldTrump who is visiting Chicago, offender now in US Secret Service custody

Police presence outside Aviary after alleged incident between an employee and Eric Trump around 8:30pm pic.twitter.com/1oIiVfsiKj

CPD was on scene and assisting the United States Secret Service with a law enforcement matter. Any and all inquiries regarding a federal protectee must be directed to the Secret Service. https://t.co/ecq5TaMiQ0